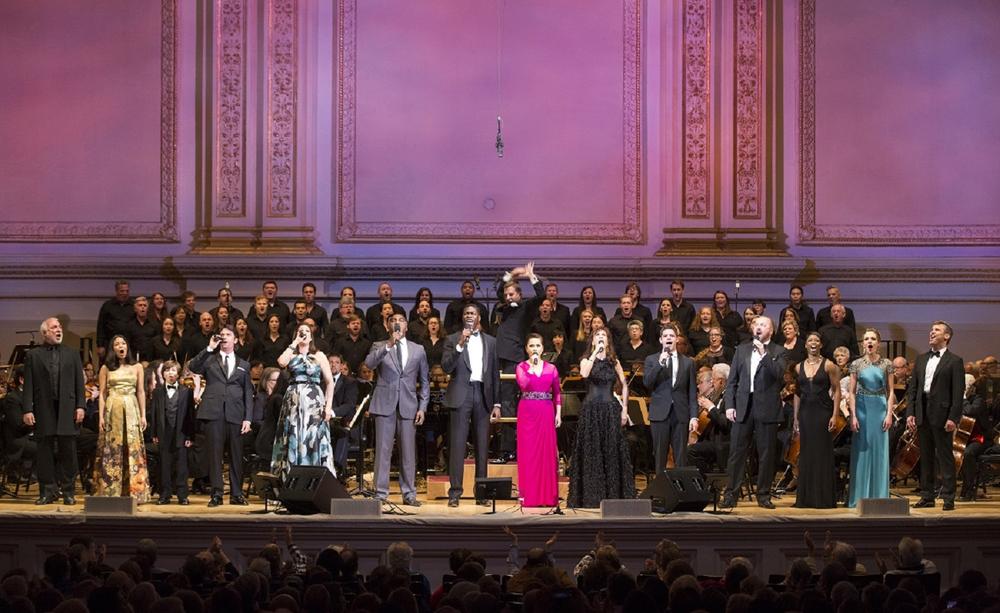 On Monday, May 2, 2016, The New York Pops marks its 33rd birthday with a grand gala evening celebrating the revolutionary collaborations of Alain Boubliland Claude-Michel Schönberg, the songwriting team behind Les Misérables, Miss Saigon, and more. Serving as Honorary Co-Chairs for the event are musical theatre legends Sir Cameron Mackintosh and Patti LuPone.

TICKETS: Advance benefit tickets to the concert-only range from $65 to $160 and can be purchased at www.newyorkpops.org. Tickets will become available to the public through the Carnegie Hall box office on Monday, March 7, 2016.

Tickets to the full gala evening range from $1,250 (concert and dinner seating for one) to $50,000 (premier concert seating and dinner table for eight). For more information about the black-tie dinner and dance at the Mandarin Oriental New York, call 212-765-7677 or visit www.newyorkpops.org.
​

On Friday, March 11, 2016 at 8:00PM, The New York Pops, led by Music Director Steven Reineke, continued its 33rd season at Carnegie Hall’s Stern Auditorium/Perelman Stage with 42nd on 57th: Broadway Today. With guest artists Darren Criss (Glee) and Betsy Wolfe (The Mystery of Edwin Drood), the concert brings the best of Broadway uptown. The program will feature a variety of musical theatre hits. Darren Criss replaces the previously announced Jeremy Jordan, who is unavailable due to a scheduling issue.

“The New York Pops and I are thrilled to invite Darren Criss and Betsy Wolfe to share the stage with us at Carnegie Hall in a concert celebrating modern Broadway tunes,” said Music Director Steven Reineke. “Darren and Betsy are both electric performers – you won’t want to miss this concert!”

ABOUT THE ARTISTS
Actor, musician and Emmy-nominated composer DARREN CRISS stars in the upcoming indie comedy Smitten, directed by Academy Award winner Barry Morrow, and most recently appeared on the Emmy Award-winning FX series American Horror Story. He starred on Broadway in the title role of Hedwig and the Angry Inch, the 2014 Tony Award winner of Best Revival of a Musical, and as J. Pierrepont Finch in How To Succeed In Business Without Really Trying. He is best known for his breakout role as Blaine Anderson on Fox's Emmy and Golden Globe Award‐winning series Glee. The San Francisco-native is a co-founder of StarKid Productions, a Chicago-based theatre company whose works have spurred viral hits, multiple Billboard charting cast albums, and sold-out national tours. His additional film, TV and stage credits include Girl Most Likely opposite Kristen Wiig and Annette Bening, The Wind Rises, Web Therapy, ABC’s Backstage with Disney on Broadway, Michael Feinstein's New Year's Eve Special on PBS, as well as hosting duties for the NewNowNext Awards and Teen Choice Awards. He received his BFA in Acting from the University of Michigan.

BETSY WOLFE was last seen on Broadway starring in Woody Allen’s musical adaptation of Bullets Over Broadway as ‘Ellen’, under the direction of Susan Stroman. Previously, she starred in the Off-Broadway revival of The Last Five Years at Second Stage Theater and the Broadway revival of The Mystery of Edwin Drood as ‘Rosa Bud’. Prior to that Wolfe played Beth in Merrily We Roll Along at Encores! and created the role of Mary Ann Singleton in ACT's World Premiere of Tales of the City, a musical based on the Armistead Maupin novels. Other Broadway credits includes Everyday Rapture with Sherie Rene Scott (a show she also performed Off- Broadway), 110 in the Shade, and The 25th Annual Putnam County Spelling Bee. Wolfe made her Metropolitan Opera debut in Douglas Carter Beane’s adaptation of Die Fledermaus, which she recently returned to for an encore engagement. Last summer, Wolfe starred in the La Jolla Playhouse world premiere production of Bobby and Kristen Anderson-Lopez’s new musical Up Here, under the direction of Alex Timbers. She starred in the San Francisco and Boston companies of The 25th Annual Putnam County Spelling Bee. Wolfe has been a guest artist for over 30 symphony, pops, and philharmonic orchestras across the U.S. and internationally including the New York Philharmonic and Chicago Symphony.  Her concert debut at Carnegie Hall was with the Cincinnati Pops Orchestra under Maestro Erich Kunzel. Ms. Wolfe was a guest soloist for the New York City Ballet where she performed at Lincoln Center and at The Coliseum in London. Recordings include Bullets over Broadway, The Last 5 Years, The Mystery of Edwin Drood, Stage Door Canteen, 35MM, and Merrily We Roll Along.  She holds a BFA in musical theatre from Cincinnati Conservatory of Music. Wolfe can also be seen in the film adaptation of The Last Five Years.

The New York Pops brings the best of Broadway uptown. Steven Reineke, Music Director and Conductor The musicians of the orchestra take center stage in this tribute to the legendary collaborations between Academy Award winners Steven Spielberg and John Williams.