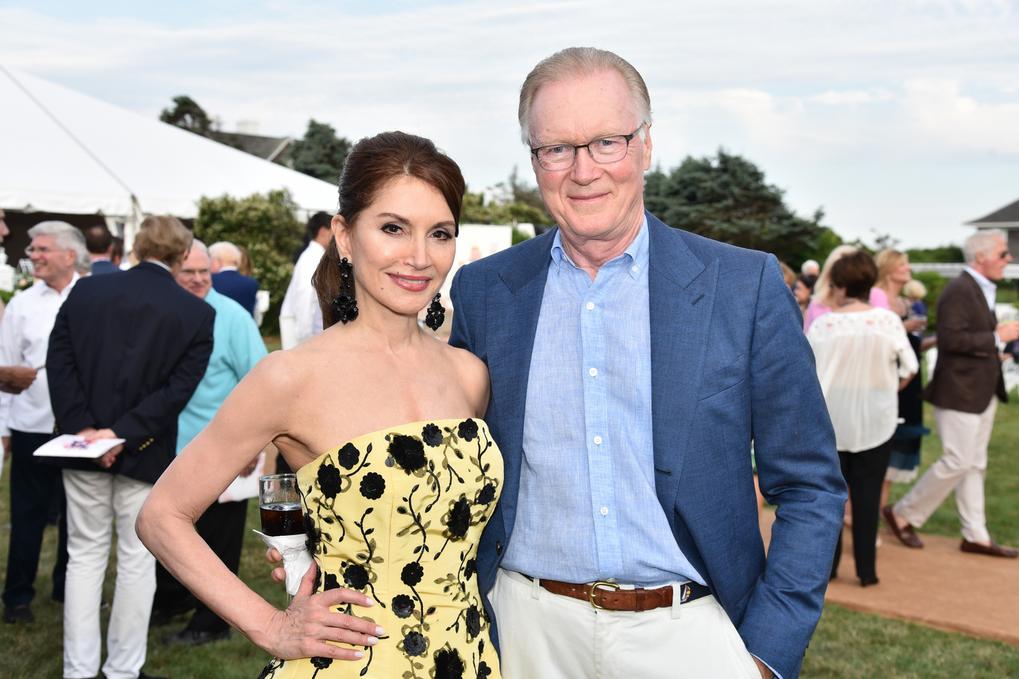 ​The Foundation’s Board of Directors, led by Board President Jonathan McCann, hosted this year’s event, which was themed around a whimsical walk in the park. The event honored SASF Co-Founder Sony Schotland and Honorary Board Member Jean Shafiroff, who has chaired the Gala for the previous five years. Philanthropist and author Mrs. Jean Shafiroff has been instrumental in helping the shelter raise nearly $4 million, while Mrs. Schotland has dedicated more than 50 years to saving homeless pets, and was instrumental in making the Southampton Animal Shelter private, with a no-kill policy. Mrs. Shafiroff as usual dressed to impress wearing a beautiful yellow Oscar De La Renta gown for the evening.

The evening began with a wonderful cocktail hour where guests were able to peruse thru different auction items including jewelry and had an opportunity to meet dogs and cats that were readily available for adoption. Guests savored on an array of hors d'oeuvres as well as tasty drinks and wine prior to the seated dinner.

Guests enjoyed dinner by Pinch Food Design, while Chris Norton and his band provided music for the evening. The event’s corporate chairs included Allen & Company, Ferguson Cohen LLP and Stifel. With thanks to supporters including AM Southampton.

This year’s Unconditional Love Gala exceeded its fundraising goal through donations, pet sponsorships and silent and live auctions, as led by Katie Jacobs. All proceeds go towards SASF's crucial initiatives, such as their low-cost spay/neuter mobile van granted by the ASPCA, efforts to rescue animals enslaved in puppy mills, and the daily care of the rescues within the shelter. Proceeds also benefit the shelter's programs that help special needs children, along with educating, mentoring and implementing SASF's "Playing for Life" program, which is currently in more than 40 shelters and recognized at major animal conferences throughout the U.S.

The mission of the Southampton Animal Shelter Foundation is to provide for the welfare of homeless animals and find them loving homes. As the only open admissions animal welfare organization in the area, they are dedicated to promoting and nurturing the bond between people and animals through adoption, medical care, behavior training and education. Proceeds from the evening's event go to support the critical programs and services they offer that make them the leader in animal welfare and responsible pet ownership in the community.

About the Southampton Animal Shelter Foundation:

Southampton Animal Shelter Foundation is a 501(c)(3) non-profit organization dedicated to providing for the welfare of homeless pets in our community and, in turn, placing them in permanent caring homes. The SASF’s mission is to provide for the welfare of animals and to reduce the number of homeless pets. The Shelter’s goal is to promote and nourish the bond between people and animals through adoption, education and community outreach. SASF recently won an award as the finest shelter on Long Island and rated in the top 10% of the country for their live release rates. The Shelter leads the country with its "live release rate", which means that of all animals brought to the shelter, 94% are adopted into loving homes.  SASF is an open intake shelter that welcomes stray pets regardless of age, breed, or health providing them with the finest care, food, training, and medical attention.  No adoptable animal is left behind!