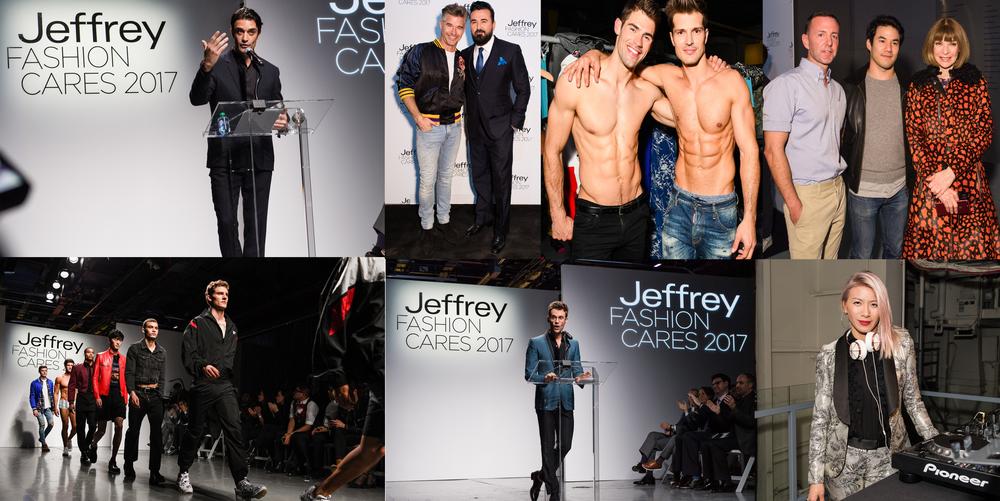 If you thought Fashion Week in New York City was over, you would be mistaken. Of course, Jeffrey Fashion Cares was not just a Runway Show but their annual fundraiser which took place on Monday, April 3rd @7PM to raise money for LGBT rights at The Intrepid, Air and Sea Museum. The event included VIP, affluent TV personalities, fashion influencers as well as business executives and raised over a popping $800,000!!!

The Intrepid, Air and Sea Museum was transformed into a mega fashion and experiential destination for guests to enjoy while sipping on an array of cocktails and eat at the different food stations prior to the runway show. There were also a few booth stations  were guests were able to pose for a GIF experience sponsored by LIFEWTR x Jeffrey Fashion Cares 2017. DJ May Kwok was spinning music for our hearts desire. Last but not least, there was a VIP section where only guests with their special VIP bracelet could enter to enjoy a more intimate setting.

"We're living in a time when our government is cutting LGBT funding and challenging our hard-won rights,” said Jeffrey Kalinsky. “Supporting organizations that advance, educate, and care for our community is critical. In that spirit, I am thrilled to renew our commitment to these fine charities."

Hosting JFC alongside Kalinsky was Brad Goreski, celebrity fashion stylist and television personality. In 2015, he joined Fashion Police as co-host. This year honored Chris Salgardo, President of Kiehl’s Since 1851, with the Jeffrey Fashion Cares Community Leadership Award for his longstanding dedication to HIV/AIDS awareness and research.

“I’m truly honored to be recognized with the Jeffrey Fashion Cares Community Leadership Award,” said Salgardo. “As President of Kiehl’s Since 1851, I’ve had the opportunity to champion diversity and be a voice for the LGBTQ community. This lifelong commitment paired with Kiehl’s spirit of inclusion have allowed me the platform to raise awareness and advocate for equal rights while fighting for the future of our next generation.”

Under Salgardo’s stewardship, Kiehl’s has created collaborations with top artists, fashion designers, celebrities, athletes, and universities to raise funds and awareness for non-profit organizations within Kiehl’s charitable pillars, which includes HIV/AIDS research. The most impressive charitable initiative created under Salgardo’s leadership is Kiehl’s LifeRide for amfAR, which features influential motorcyclists riding alongside Salgardo to raise money and awareness for HIV/AIDS. Since its inception, the ride has raised more than $1,600,000 for amfAR since 2010, funding eight cure-related research projects.

The Jeffrey Fashion Cares event features an exciting silent auction and a cocktail reception followed by a fashion show walked by some of the world’s top models.

Catch the experience below of the entire evening and make sure to attend next year's event in New York City or Atlanta to support this great fashion and fundraiser event.

Established in 1992 in Atlanta and 2003 in New York by Jeffrey Kalinsky, Jeffrey Fashion Cares was founded to heighten awareness of people living with HIV/AIDS, support LGBT youth, and challenge discrimination against the LGBTQ community. In 25 years, Jeffrey Fashion Cares has raised nearly $15 million for both New York- and Atlanta-based organizations, donating on average an astonishing 90% of all proceeds. Jeffrey Fashion Cares New York benefits the Elton John AIDS Foundation, the Hetrick-Martin Institute, and Lambda Legal.

The Elton John AIDS Foundation funds frontline programs that help to alleviate the pain - whether physical, emotional or financial - of those living with, affected by or at risk of HIV/AIDS, and to continue the fight against this worldwide pandemic so that no one is left behind.

The Hetrick-Martin Institute believes that all young people, regardless of sexual orientation or identity, deserve a safe and supportive environment in which to achieve their full potential. They do this by creating a safe space for LGBTQ youth and their families, offering direct services and referrals to promote healthy youth development and, they create innovative programs other organizations can use as models.

Lambda Legal is the oldest and largest national legal organization whose mission is to achieve full recognition of the civil rights of lesbians, gay men, bisexuals, transgender people and those with HIV through impact litigation, education and public policy work.