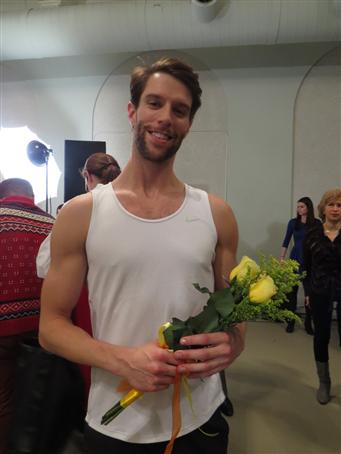 On the evening of January 27th  Barbara Brandt moderated the evening having a Q&A with American Ballet Theatre Choreographer Marcelo Gomes, and principal dancers Misty Copeland and James Whiteside. The evening began with the Live Q&A asking each artist based on their artistic experience "What it takes to become an Artist".

The evening consisted of a Q&A and discussion by each dancer and demonstration of an impromptu dance choreographed by Marcelo Gomes. It was an incredible evening as arts, and ballet enthusiasts alike where able to immerse themselves and witness the daily routine of a dancer and what it takes to put together a dance piece. It was the choreographers vision, but the dancers surely incorporated their own  additions and style to the dance giving a complete artistic group piece. The practice dance consisted of approximately 10-15 different takes which led to the final piece.  Below you will see the complete choreographed dance approximately 2 minutes long performed by Misty Copeland and James Whiteside which although they knew of each other this was their very first time dancing together. Afterwards, the reception began where guests enjoyed appetizers, wine and mingle with the dancers and supporters.

A little background on the dancers, Misty Copeland was born in Kansas City, Missouri and was raised in San Pedro, California. She was discovered when she was 13 years old at the Boys and Girls Club in Southern California. She took her first ballet class at the age of 13 and within 3 months was en pointe. Soon after that she starred as "Clare" in "The Chocolate Nutcracker", a Debbie Allen narrated  African American version of The Nutcracker. At the age of 15 Misty won First Place on the LA Spotlight Awards prompting The Los Angeles Times as the best Young Dancer in Greater Los Angeles area. This opened the doors for Misty as she then won a full scholarship to attend The San Francisco Ballet's Summer intensive program.  Consequently, she was offer a full scholarship to the American Ballet Theatre's Summer Intensive Program. At the end of the program Misty was one of six girls chosen from 150 to join American Ballet Theatre Studio Company. Her endorsements past and present include Blackberry, Bloch, Dr. Pepper, Proactive, Payless, Capezio, Sansha, Boys and Girls Club, Lavazza Coffee and Under Armour.

She currently has a book published "Life in Motion: An Unlikely Ballerina". The book is about Misty's life and her current experience as a dancer. She is schedule to perform with Dancing with The Stars Choreographer Derek Hough at the Grand Prix Gala in New York City on April 10th. For more information about the gala and for tickets, go to: http://www.yagp.org/wordpress/?page_id=2947

Misty's performance schedule for 2014 include:

American Ballet Theatre Principal Dancer James Whiteside was born in Fairfield, Connecticut. James began his training at age of nine at the D'Valda & Sirico Dance and Music Centre, where guest faculty included Franco De Vita and Raymond Lukens. He continued his training at the Virginia School of the Arts for one year under the direction of Petrus Bosman and David Keener. In 2002, Whiteside joined Boston Ballet II, where he continued to train under the tutelage of its director Raymond Lukens, now director of ABT's National Training Curriculum. Whiteside joined the corps de ballet of Boston Ballet in 2003 and became a second soloist in 2006. He was promoted to first soloist in 2008 and to principal dancer with Boston Ballet in 2009.

Whiteside joined American Ballet Theatre as a Soloist in September 2012 and was named a Principal Dancer in October 2013. His repertoire with the Company includes Ali, the Slave in Le Corsaire, Basilio and Espada in Don Quixote, the Nutcracker Prince, Arabian Man and Spanish Dance in Alexei Ratmansky's The Nutcracker, Prince Gremin in Onegin, Romeo in Romeo and Juliet, the Russian Suitor and a Fairy Knight in The Sleeping Beauty, Prince Siegfried and von Rothabrt (Ballroom) in Swan Lake, Orion in Sylvia, Caliban in The Tempest and roles in Bach Partita, Gong, Theme and Variations, Chamber Symphony, Drink to Me Only With Thine Eyes, In the Upper Room and Symphony in C.

James' performance schedule for 2014 include:

Marcelo Gomes, a native of Brazil, was born in Manaus and raised in Rio de Janeiro, where he began his dance studies at the Helena Lobato and Dalal Achcar Ballet Schools. He went on to study at The Harid Conservatory in Boca Raton, Florida, and at the schools of the Paris Opera Ballet, Houston Ballet, Boston Ballet, and Cuballet. He created the roles of Aktaion in Artemis, the Portrait in Dorian, Ivan in Alexei Ratmansky's Firebird, Death in HereAfter, Sergei in On the Dnieper, Prospero in The Tempest and leading roles in Black Tuesday, C. to C. (Close to Chuck), Clear, Concerto No. 1 for Piano and Orchestra, Everything Doesn't Happen at Once, From Here On Out, Glow - Stop, Symphony #9 and Thirteen Diversions.

American Ballet Theatre promoted Gomes to Soloist in August 2000 and Principal Dancer in August 2002. In 2008, Gomes danced Twyla Tharp's Sinatra Suite, partnering Luciana Paris, at the Kennedy Center Honors. He won the Benois de la Danse for best male performer in the same year. Gomes has appeared as a guest artist with the Kirov and The Royal Ballet. He has appeared with the Kings of the Dance since 2006. He made his debut with the Bolshoi Ballet in July 2013, dancing the title role in Onegin opposite Diana Vishneva.

Gomes' performance schedule for 2014 include:

The Making of an Artist 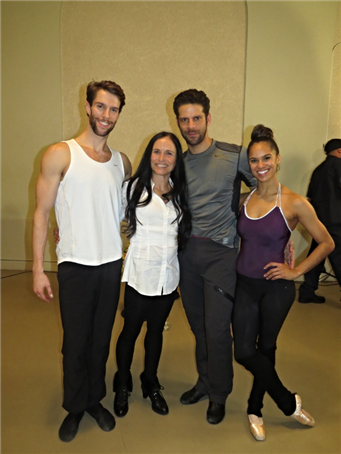