Sushi lovers in New York City to experience David Bouhadana’s new omakase destination, Sushi by Boū bringing the 12-piece, 30-minute, $50-omakase with his own signature style to a 4-seat venue at Gansevoort Market.  Open seven days a week for lunch and dinner, Sushi by Boū features the same high-quality, quick-service format that Bouhadana’s fans know and love, enhanced with new experiences to offer what the sushi chef states is his “best omakase yet.”

He is recognized as one of the most innovative sushi chefs in New York City today. His story begins in Florida where, at the age of 18, he began waiting tables at Yokohama Sushi, a local spot in his hometown of Boca Raton.  It wasn’t long before he found himself in the kitchen, and his unbridled passion for sushi was discovered.  Bouhadana trained incessantly, working incredibly hard to hone his skill and learn everything he could about the restaurant industry.  By the end of the year, he had assumed the position of head chef.

Knowing there was more for him to learn, Bouhadana then spent his early 20s studying and perfecting his craft in Japan.  He worked admittedly-exhausting 14-hour days under a rigid Japanese sushi master in a restaurant outside of Osaka, where he also taught himself the language.  When he returned to the U.S., his next destination was New York City. Bouhadana landed at some of the best sushi restaurants in Manhattan, such as Morimoto, and designed his own menu at Sushi Uo before moving on to open the highly successful Sushi Dojo in the East Village.  There, Bouhadana began developing his own omakase experience, pairing expertly-prepared sushi with a lively atmosphere and aesthetic.

Since then, Bouhadana has made a name for himself by recreating Japan’s authentic fast-casual omakase concept with his own signature style in New York.  He was named one of the top chefs in the country under 30 by Zagat, and recently won a New York Emmy Award for his web seriesShokunin: An Eater Series hosted by David Bouhadana.  Above all, Bouhadana’s passion and energy make him a force to be reckoned with.  The Sushi by Boū omakase is both refined and creative, offering pieces such as toro with a touch of truffle salt and Three Amigos, combining ikura, quail egg and uni.  Those who complete their omakase journey within their 30-minute reservation will be invited to continue sampling off-the-menu chef specials such as the Big Mac – a triple stack of toro, scallop and uni, and the Waguni Handroll, among other pieces.  The concept also features a pop-up guest chef omakase station, offering customers access to two entirely different menus and experiences in one action-packed space.

Furthermore, Sushi by Boū has what is soon to be known as the city's best omakase-in-a-box.  The signature omakase (12 pieces) will be expertly packaged in a custom box and available for take-out ($50 a box + $12 for an extra roll) and delivery exclusively via Caviar. 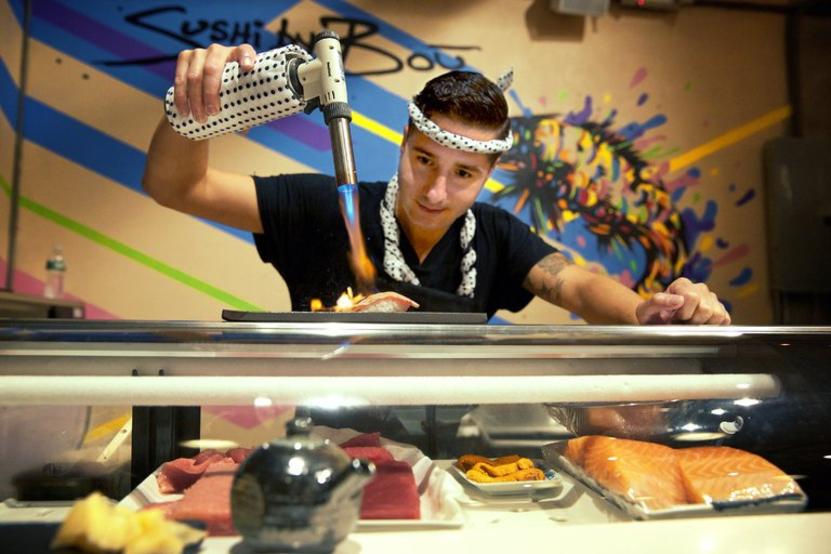 Sushi Lovers to experience Omakase Sushi with a twist at