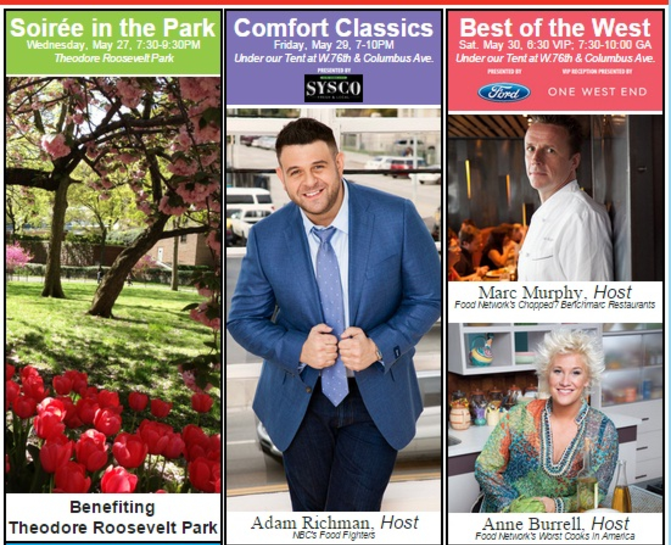 ​The 2015 New Taste of the Upper West Side kicks off again this May with an exciting lineup of new and returning restaurants, world-class chefs and celebrity hosts for an unforgettable three-night culinary celebration. The annual event, which was created by the Columbus
Avenue Business Improvement District (“BID”), a 501(c) (3) not-for-profit, donates all net proceeds to the local community for neighborhood improvement and beautification projects such as the Columbus Avenue BID’s Sustainable Streetscape project, and other beneficiaries as the Wellness in the Schools program, Greenhouse Classroom, Citymeals-on-Wheels and Theodore Roosevelt Park.

“This amazing three-day event has enabled our BID to give back to the community in so many important ways,” says Barbara Adler, Executive Director of the Columbus Avenue BID. “Now in its eighth year, it has been crowned New York’s top neighborhood food festival and continues to be a boon to our local restaurants and businesses.”

The festivities begin with Soirée in the Park on Wednesday, May 27th, an outdoor cocktail event that celebrates and raises funds for New York City’s beautiful Theodore Roosevelt Park, surrounding the American Museum of Natural History. Guests enjoy live chamber music under the stars with champagne and hors d’oeuvres provided by a host of local restaurants including Sarabeth’s and Luke’s Lobster. All
net proceeds from the evening are donated for park enhancements.

New Taste of the Upper West Side brings the community together yearly through a culinary celebration that continues under an elegant, block-long tent with Comfort Classics presented by Sysco on Friday, May 29th, where 40 Upper West Side restaurants will display their most innovative and creative “homestyle” fare, while competing to win the title of “Best Comfort Food Dish.” NBC’s Adam Richman, host
of Food Fighters and author of “Straight Up Tasty” (released May 2015) is hosting this event. There will also be a special guest appearance by Food Network’s talented Katie Lee, who will be autographing a limited number of copies of her new book, “Endless Summer Cookbook.” Returning to the main stage is Christina Tosi of Momofuku Milk Bar along with a bevy of noteworthy participants including Shake Shack, Sarabeth’s and The Meatball Shop. The excitement of the evening will be further highlighted by sensational international wine selections, creative cocktails and live music provided by the Silver Arrow Band.

The culmination of this star-packed three-day food festival is Best of the West presented by Tri-State Ford on Saturday, May 30th, where many of the Upper West Side’s most famous restaurants and celebrity chefs are the focus of an evening centered around spectacular cuisine, world-class wines and enticing cocktails, buoyed by the 16-piece rhythms of Joe Battaglia & The New York Big Band. The celebratory event will be hosted this year by Anne Burrell, host of Food Network’s Worst Cooks in America, and Marc Murphy, owner and executive chef of Benchmarc Restaurants (Landmarc and Ditch Plains), executive chef of Kingside and popular judge of Food Network’s Chopped. MC’ing the event is Lauren Scala of NBC 4 New York’s “Today in New York.” With 40 New York City restaurants, including Boulud Sud, RedFarm and Dovetail, it is a celebration of fine cuisine under the rand white tent that spans Columbus Avenue between West 76th and 77th Streets.

For the first time ever, New Taste of the Upper West Side is offering a VIP Reception presented by One West End, an enhanced experience that includes exclusive access to a private lounge to enjoy unlimited champagne. VIP guests will receive gift bags from Upper West Side shops and our sponsors, and participate in private book signings with complimentary cookbooks from Anne Burrell, author of
“Own Your Kitchen” and Marc Murphy, author of “Season with Authority,” (released April 28, 2015).

This special event gives guests early access to 40 of the best chefs on the Upper West Side an hour before general admission. Please note that books are limited.

For more information and to purchase tickets, please visit www.newtasteuws.com.​​

Wednesday, May 27th - Soirée in the Park