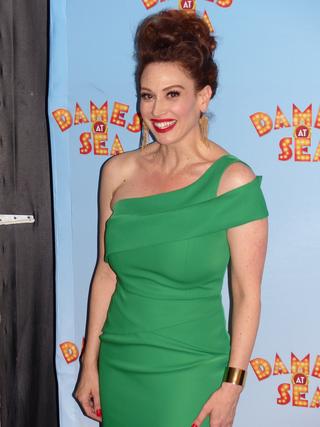 John Bolton as The Captain/Hennesey

​​​DAMES AT SEA is a tap-happy gem of a show that celebrates the golden era of movie musicals with dazzling dances, spectacular songs and delightful dames! Ruby steps off a bus in Manhattan, and into her first Broadway show, but hours before the opening night curtain is to rise, the cast learns their theater is being demolished, so it is “all hands on deck” to find a stage to put on the show. Featuring rollicking tap dancing, love at first sight, joyful music and a boatload of laughs, DAMES AT SEA has everything you need to sweep your glooms away.

​DAMES AT SEA featuresscenic design by three-time Tony Award nominee Anna Louizos (In The Heights, Rodgers & Hammerstein’s Cinderella), costume design by two-time Tony Award nominee David C. Woolard (West Side Story, The Rocky Horror Show), lighting design by Tony Award winner Ken Billington (Chicago, Act One) and Jason Kantrowitz, and sound design by Tony Award winner Scott Lehrer (South Pacific, The King & I). One of the most unique musicals ever created, the original production of DAMES AT SEA pulled off the feat of creating a magnificent musical experience with a tight, multi-talented cast of six. DAMES AT SEA opened OffBroadway at the Bouwerie Lane Theatre on December 20, 1968, and became an immediate smash hit and quickly transferred to the Theater de Lys on April 22, 1969, were it went on to run for 575 performances. The Theater de Lys, now called the Lucille Lortel Theatre, has the same basic stage dimensions as Broadway’s Helen Hayes Theatre. DAMES AT SEA successfully crossed the Atlantic twice to play the West End’s Duchess Theatre in 1969 and again in 1989 to play the West End’s Haymarket Theatre.

We had a chance to interview some members of the cast during the after-party which was held at the iconic Sardi's Restaurant. Each cast member has an unbelievable amount of dancing and singing experience. The major requirement for this show is to certainly be a tap dance expert. Most of the cast started tap dancing since they were four years old or so. The only member who started learning to tap dance in his 20's was John Bolton who portrays The Captain/Hennesey.

​The cast rehearsed prior to preview night for three and a half weeks and preview performances lasted about a month prior to opening night. The show is a riveting, high octane choreographed tap dances with wonderful songs which make you want to tap dance right on your seat while watching the show. This is a great show for adults and younger audiences who love musicals.

We first spoke with Danny Gardner who portrayed Lucky, he was mesmerized by the audience standing ovation during the opening night finale. "The audience response was overwhelming and at the end of the curtain call, I cried" said Danny.  This was Danny's Broadway debut and he hopes for the audience to forget their troubles for 2 hours, have fun and transport themselves to the wonderful world of the 1930's musicals.

​We also had the pleasure of speaking with Eloise Kropp who portrays Ruby.  We wanted to know who her biggest inspiration is and the reason why she decided to be a performer. "Eleanor Powell was my biggest inspiration, I fell in love with her because the moment I saw her dancing on film I thought she was a powerhouse. She can do all the steps all the boys can do and in my eyes even better than them. She had character, she was corky and a little different and I was immediately drawn to her." Eloise started tap dancing when she was 8 years old which is a tad later then most of her cast mates but her talent is a force to be reckoned with.

We had an opportunity to speak with John Bolton who portrays The Captain/Hennesey.

How did he prepare for the role?? He watched old classic films such as "42nd Street", "Gold Diggers" and so many more from those great old times. John was drawn to all those great characters men performing especially Hugh Herbert.

It's interesting to see how he is now a Broadway performer since he actually has a Bachelor's Degree in Journalism. He's very happy his career path has take a turn and now a Broadway performer. Performers who have inspired him to become whom he is today include Dick Van Dyke, Harvey Korman, and mainly actors from the 1930's. Now on Broadway his favorite shows include Hamilton, but also prefers the old fashion Broadway shows with a strong revival such as "The King and I".

Last but not least, we had the pleasure of speaking with Lesli Margherita who portrays Mona Kent. She prepared for the role by taking it piece by piece and emphasized on concentrating one piece at a time. Once rehearsals took place, the songs and performances went thru smoothly for her. She was easily able to get into character because of the clothes, make-up, wig and transformation as Mona Kent. She felt like a diva when she was on stage. Lesli Margherita's inspiration and role models are Carol Burnett, Chita Rivera, and Rita Moreno. She enjoys their performances as they did drama and comedy. Lesli believes people will love the show because they will have 2 hours of full throttle entertainment and laughter.

Ms. Margherita was wearing a beautiful green gown by BCBG and her jewelry for the evening was from the BaubleBar Fashion Jewelry at Bloomingdale's.

Ms. Margherita is an American musical theatre, voice, film and television actress. Lesli trained at UCLA and was soon after chosen to star in MGM's television series Fame L.A. directed by Kenny Ortega. She has gone on to star and recur on numerous television shows and pilots including Major Crimes, The Suite Life on Deck, Charmed, NYPD Blue, The District, JAG, and On The Lot, produced by Steven Spielberg. She is also known for her theatre work, playing Inez in Zorro the Musical in London's West End, for which she won an Olivier Award. She also played Mrs. Wormwood on Broadway in Matilda the Musical for over 2 years and now plays Mona Kent in Dames At Sea.​​​

Photos courtesy of DAMES AT SEA and LUXXELIVING 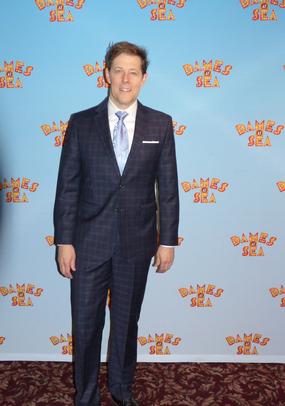 Closing performance of the cast during DAMES AT SEA Broadway show during opening night at Helen Hayes Theatre. 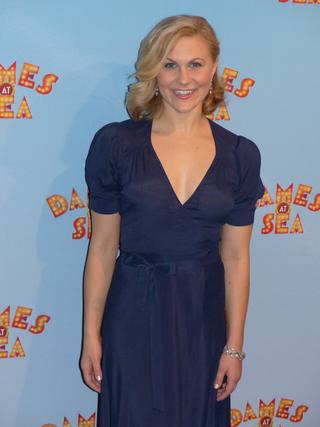 Interviews from members of the cast live from the after-party at Sardi's Restaurant in New York City after the opening night performance. 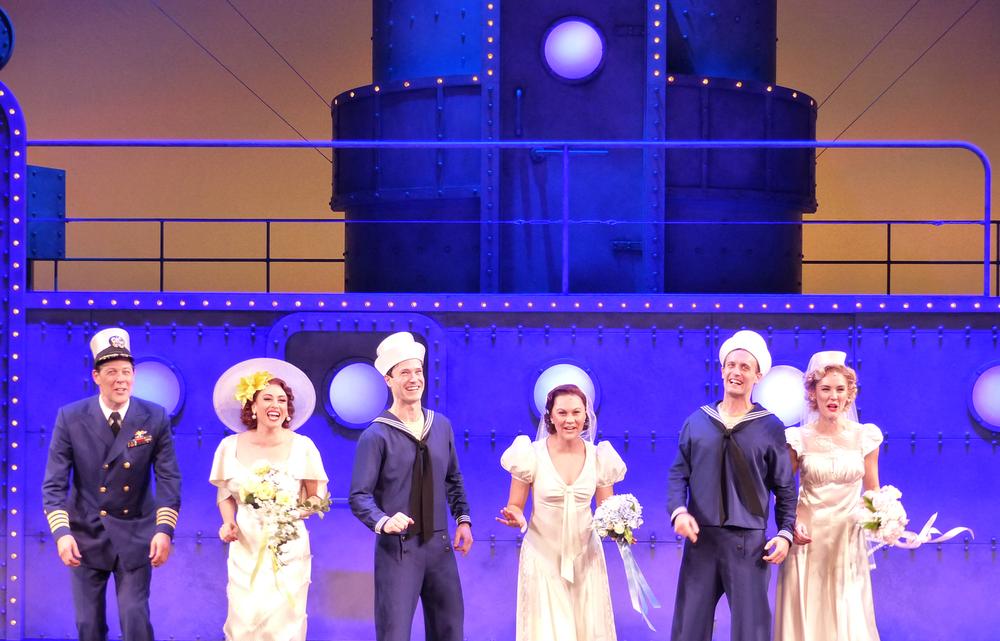 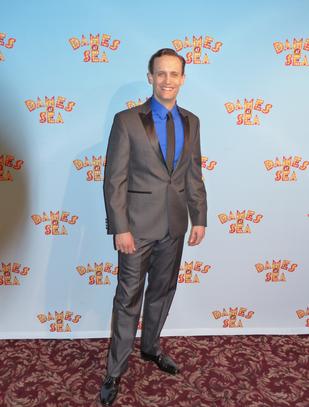 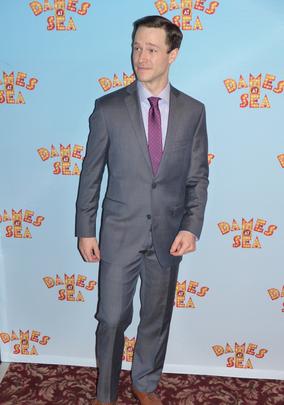 John Bolton who portrays "The Captain/Hennessey" 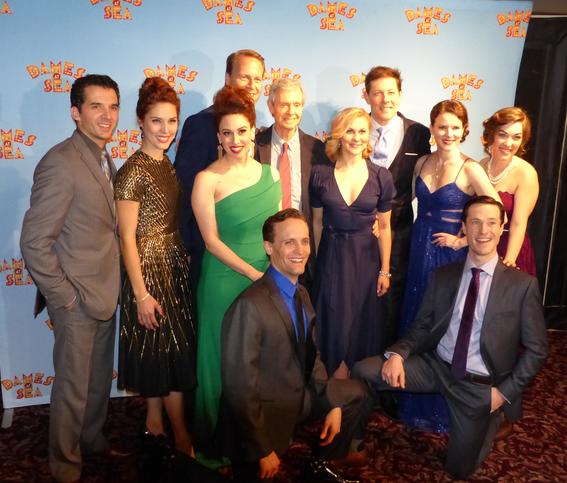 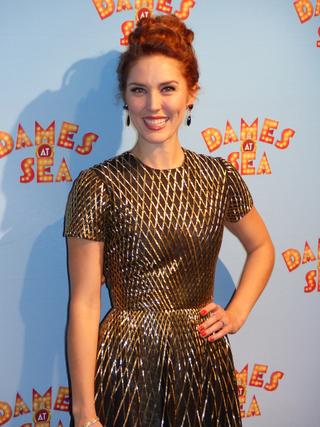