with a Cocktail Reception at The Grand Tier at

The Metropolitan Opera at Lincoln Center

It was very special to attend the event since the focus this time was on the chandeliers. Lobmeyr also showcased smaller versions displayed throughout The Grand Tier for guests to view. The Austrian theme continued as guests enjoyed their mixed drinks with garnished silver and Austrian crystal stir picks as well as Austrian clear colorful glasses.

​The guests enjoyed an array of Hors d'oeuvres, Austrian wine, Prosecco and a specialty Austrian cocktail from Sanatorium  liquor.

Lobmeyr, founded in 1823, celebrated the spectacular landmark chandeliers designed in 1966 – A new archetype of light.

Founded in 1823, Lobmeyr, the iconic family-run European crystal and chandelier-making manufacturer, celebrated its 50th anniversary debut of the iconic unveiling of its chandeliers at the Metropolitan Opera Lincoln Center. To coincide with the 50th anniversary of the Metropolitan Opera House at Lincoln Center, Lobmeyr celebrates this historic moment, as the first applause went to the twelve spectacular starburst chandeliers that rose towards the ceiling with the first curtain in 1966.

Evoking a celestial theme, Hans Harald Rath designed 32 chandeliers and 331 crystal wall fixtures in 1966. As legend has it, the idea for these unique chandeliers happened overnight. Inspired by a book of distant galaxies and the big-bang theory, sent to Lobmeyr by Met architect Wallace K. Harrison, Rath shaped these extraordinary starburst crystal constellations. The Met Collection is one of Lobmeyr’s best-selling lighting collections to this day and still in production by the master craftsmen in the family heritage workshops in Vienna.

The star-shaped chandeliers in the auditorium feature polished brass, hand-cut glass crystal, and glittering clusters of crystal pearls that rise magnificently towards the ceiling. In the foyer, the cascade of exploding stars, covering a span of some 80 feet, positioned in the midst of the staircase quickly became a New York landmark soon after its opening night in September 1966 and has remained iconic to this day.

In 2008, the graceful chandeliers returned to their birthplace, the Lobmeyr Vienna Workshops, for the first of its kind restoration process. Funded by Swarovski, maker of 90% of the original crystals, the master craftsmen realized the painstaking replacement of 49.000 crystals with new custom-made crystals. Beyond this signature restoration project, the workshop has developed over 10,000 cast models, building a ‘living archive’ of old techniques, while constantly infusing ideas and technical know-how into new product design and development. In addition, Lobmeyr has created a series of extraordinary bespoke commissions, most recently for the Stadtpalais Lichtenstein, The Four Seasons in Hamburg, and many more.

To coincide with the 50th anniversary, Lobmeyr also presented a cascade of original chandeliers from the MET Collection, alongside a number of highlight products such as the Hoffmann Bronzit drinking set, part of MoMA’s design collection, at ICFF, May 14 – 17th, 2016.

Founded in in Vienna’s Kaerntner Strasse in 1823 by Josef Lobmeyr, the company is in its sixth generation as a family business. Since its early beginnings, Lobmeyr has represented a love of the material, an emotional relationship with the product and a commitment of personal energy and relationships with clients. In this context each generation leaves its trace. In its historic lineage Lobmeyr has always worked with outstanding designers, from the 19th century Viennese architects, pioneers of the Modern Movement, such as Adolf Loos and Josef Hoffmann to contemporary artists. The list of collaborating designers mirrors not only the diversity, but also the quality of Lobmeyr’s work with crystal. Driven by a passion of craft the products continually focus on the contemporary interpretation of glass, while the business has never stopped cultivating its heritage. In their unique glassware, known for its subtlety and sophistication, the old inspires the new and the traditional know-how facilitates innovation. Recent contemporary designers that have created special collections in collaboration with Lobmeyr, include: Ted Muehling, Michael Anastassiades, Formafantasma, Helmut Lang, Stefan Sagmeister, Marco Dessi, and Sebastian Menschhorn.

About the Metropolitan Opera Lincoln Center:

The Metropolitan Opera is America’s leading performing arts organization and a vibrant home for the world’s most creative and talented artists, including singers, conductors, composers, orchestra musicians, stage directors, designers, visual artists, choreographers, and dancers. The company presents more than 200 performances each season of a wide variety of operas, ranging from early masterpieces to contemporary works. Under the leadership of General Manager Peter Gelb and Music Director James Levine, the Met has launched many initiatives designed to make opera more accessible, most prominently the Live in HD series of cinema transmissions, which dramatically expands the Met audience by allowing select performances to be seen in more than 2,000 theaters in 70 countries around the world​. 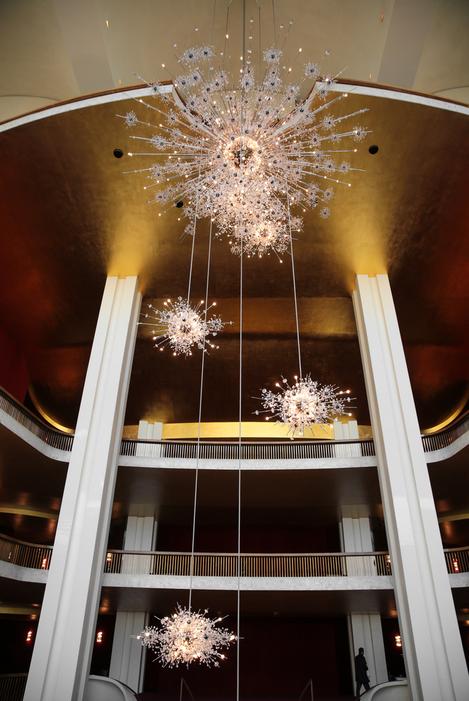