The premiere held at Ziegfeld Theatre on January 15, 2016 in New York City. The after-party took place at Cipriani Midtown a legendary locale hosting fundraisers and exquisite events. HBO had a tight list for this invitation only event, as guests were provided with a plastic black wristband with VINYL silver letters. the wristband gave the invitees access to the after-party.

Richie Finestra, the founder and president of American Century Records, is trying to save his company and soul without destroying everyone in his path. With his passion for music and discovering talent gone by the wayside, and American Century on the precipice of being sold, he has a life-altering event that reignites his love of music, but severely damages his personal life.

The HBO drama series kicks off its ten-episode season SUNDAY, FEB. 14 (9:00-11:00 p.m. ET/PT) with a pilot directed by Scorsese, from a story by Rich Cohen & Mick Jagger & Martin Scorsese and Terence Winter, and teleplay by Terence Winter and George Mastras, followed by hour-long episodes debuting subsequent Sundays at the same time.

Richie Finestra’s wife, Devon (Olivia Wilde), a former actress and model who was part of Andy Warhol’s Factory scene in 1960s New York City, is now a suburban mother of two. Richie’s personal and professional crises put additional stress on their relationship, inspiring a desire to return to her Bohemian roots.

Meanwhile, as head of promotions and a partner at American Century, Zak Yankovich’s (Ray Romano) experience in the industry and hundred-dollar handshakes make him an invaluable part of the company, though he works in Richie’s shadow. Their professional relationship is strained by disagreements over how to guide the company through the music landscape of 1973.

New York City, 1973. Together with his partners, Richie Finestra (Bobby Cannavale), president of American Century Records, is on the verge of selling his struggling company to German Polygram, in a deal that includes an impending distribution agreement with Led Zeppelin. But after a disastrous meeting, it’s clear that the sale is in jeopardy.

Heading home to Greenwich, Conn., Richie takes a detour to an unplanned reunion with Lester Grimes (Ato Essandoh), a musical artist with whom he has a complicated history. With thoughts of Lester weighing on him, Richie heads to the office, where, in addition to the Led Zeppelin situation, he learns of another problem: Bombastic Frank “Buck” Rogers (Andrew Dice Clay), owner of a chain of radio stations, is about to boycott American Century due to a perceived slight by one of the label’s artists.

In crisis mode, Richie gives his A&R department the mandate to find new acts, prompting office assistant Jamie Vine (Juno Temple) to bring in The Nasty Bits, a proto-punk band unlike anything anyone has ever heard.

Despite American Century’s troubles, Richie learns that Polygram has agreed to buy the company after all. That night, with both Lester and the Buck Rogers debacle on his mind, he goes violently off the wagon, trashing the den of his Connecticut home and severely jeopardizing his relationship with his wife, Devon (Olivia Wilde), and their two children.

Richie ultimately finds himself coked out and on his own, drawn by a crowd of young people to the Mercer Arts Center in Manhattan, where he sees The New York Dolls perform, a night that sets him on a completely new course.

VINYL will also be available on HBO NOW and HBO GO. 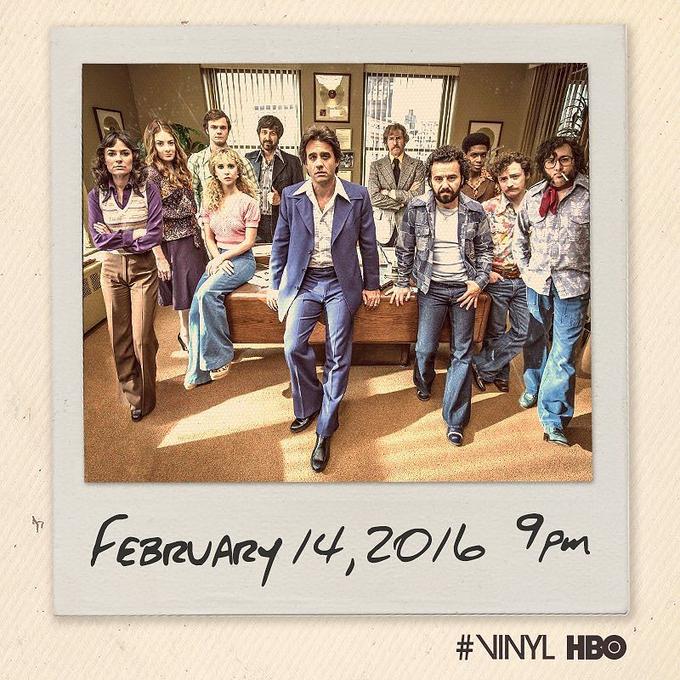