The Rainbow Room in preparation for the 75th Annual Bal des Berceaux Gala. 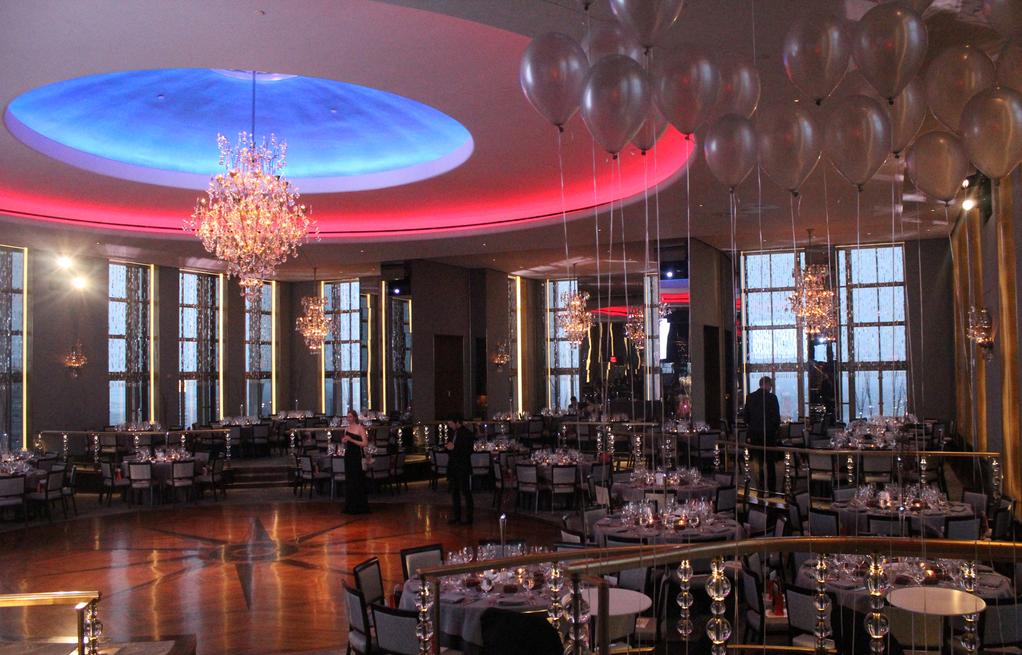 The evening was a truly beautiful experience as guests were dressed in impeccable long gowns which was appropriate since the event took place at the newly renovated Rainbow Room which is located at 30 Rockefeller Plaza. A lot of the attendees have been supporting the event as they come every year to attend the annual gala.

The event commenced with cocktail hour and guests were able to mingle as well as have a chance to view some artwork being auctioned off prior to the seated dinner at the main chandelier room. Guests enjoyed an array of appetizers including Parmesan Profiteroles with Herbed Goat Cheese, Cones with Avocado Mousse, Red Radish & Pickled Cucumber, Peekytoe Crab “Louis” in a Little Butter Gem Lettuce Cup, Petit Lobster Roll with Simple Lemon Mayo & Celery, Petit Filet of Seared Beef with Romesco on Crostini, Torchon of Foie Gras with Walnut-Fig Toast, Fig Jam & Aged Balsamic Syrup. The backdrop was New York City with a beautiful view of the Empire State Building, Chrysler Building and the cityscape.

“We are truly blessed by the amazing generosity of our guests.  The support of all of our sponsors and the dedication of all our volunteers is what makes this yearly event such a perennial success,” said Marguerite Mangin.

The Bal des Berceaux is an annual fundraising gala that currently raises money for seven children’s charities in both United States and France.

FAAFC honored The Storefront Academy Harlem for its 50 years of exemplary education for the young children of Harlem.  FAAFC has been supporting Storefront Academy for the last 34 years since 1982.  Elsie Aidinoff, Ray Cameron and Elisa Istueta were in attendance.

​The Master of Ceremonies was the eminent Television broadcast journalist and author Mark Ellwood.  The US charities include:

- Kips Bay Boys & Girls Club: an after-school activity center in the Bronx where teens and youngsters learn to recognize and develop their potentials.
- Storefront Academy Harlem: a private, tuition-free school in Harlem with programs from pre-school to 8th grade.
- The Children's Village: a residential care and treatment center for neglected, battered and abused children in judicial care, reeducating families to reintegrate their children back into a safe home life.

The event wouldn't be complete until the crowd would get up and go to the ballroom to dance the remaining of the evening while listening to the Lester Lanin Orchestra play an array of music.

The Storefront Academy was founded in 1966 in vibrant Harlem to create a safe space for young children.  In 1981, Storefront Academy expanded into an elementry school to provide educational opportunities along with enrichment programs, preparing young children academically, socially, and emotionally to become critical thinkers, high-achievers, and well-rounded individuals.  Working in partnership with families and community members, Storefront Academy instills a powerful sense of self, and gives its students the tools to own the future and create meaningful adult lives.  As a result of nearly 50 years of success, in September 2015 Storefront Academy opened a charter school in the South Bronx.

French-American Aid for Children, Inc. “Children Come First” (FAAFC), is a New York 501(c)(3) non-profit organization. FAAFC is composed of volunteers and has been in existence for the past 77 years. FAAFC’s primary purpose is to provide financial assistance to vetted children’s charities promoting the health, education and prevention of abuse of children in both United States and in France.  The funds donated by FAAFC are earmarked for specific projects and their use is closely monitored.  As the sole non-profit organization in America which has been generously donating time and funds to children’s charities in France and in the United States, FAAFC follows a long-standing tradition of fundraising for neglected, abused, and sick children.

The annual Bal des Berceaux was first held in 1942 and has been FAAFC's main fundraising event ever since.  Nearly half a million dollars were raised at last year’s gala.  All funds are used to further FAAFC’s mission.  The event attracts French and American dignitaries as well as distinguished guests from New York and community leaders from around the world.  In the past, international debutantes made their introduction into society.

The 2016 Bal des Berceaux marked not only the FAAFC’s 75th anniversary, but also the Storefront Academy’s 50th anniversary and their successful mission to improve the lives of underserved New York City children through educational and developmental schooling.

This year’s successful gala was once again chaired by FAAFC’s President, Marguerite Mangin, and Co-chaired by Lucila Vollbrechthausen and Margarita Somnolet. The event featured the entertainment by the Children from Kips Bay Company performance. The Live Auction was conducted by Nicholas Lowry, President of Swann Galleries, and featured items donated by Adlers Jewelers, Air France, Alex Sepkus, Baccarat, Le Bristol Hotel, Ferragamo, Givenchy, Kaviari, La Mamounia, Lalique, and Viking Cruises among many others.