Non-profit organizations are continuing to find a cure for cancer by having intimate cocktail parties, receptions, food tastings and the most popular one charity dinners with silent and live auctions.

Finding a cure and helping the families live a better life while their loved ones are trying to battle this disease is what these non-profit organizations are trying to accomplish. I've attended a good number of charity events in New York City to find a cure for a disease, but I can say I am very impressed on the number of cancer charities raising money to find a cure and/or to give support to cancer families. In the last 1 1/2 weeks I've attended three different cancer charity events.

Cancer is a delicate subject to discuss, but I think most people I know have been affected in one way or another. I personally lost a colleague to ovarian cancer. She was a loving mother and wife and had many more years to be part of our lives but unfortunately cancer took her from us. Can we finally find a cure for all the different types of cancer???

The first cancer charity event I recently attended was on April 20th at Cipriani 42nd Street for CancerCare. They are the leading non-profit organization providing free, professional support services to anyone affected by cancer. At the event at Cipriani, they raised $1,000,000 during their annual Gala. More than 500 members of New York City's philanthropic, fashion, and health care communities attended the event and honored contributors who make it possible for people with cancer and their families to benefit from CancerCare’s services, including counseling, educational workshops and publications, childcare, transportation to treatment, and financial assistance.

​Frank Doroff, Vice Chairman, Bloomingdale's was honored with the 2016 Help and Hope Award for his commitment to supporting CancerCare’s mission. Bloomingdale’s Chairman and CEO Tony Spring presented the award to Doroff, acknowledging his decades of dedication to the organization, and highlighting his “unwavering commitment to the people who have sought CancerCare’s support.”

Upon receiving the award, Mr. Doroff, who lost his wife, Kate, to cancer at just 49 years old in 1993, shared “I was very lucky to have the support of my family and friends, as well as my Bloomingdale’s family, and often think about others dealing with cancer who do not have this same level of support and resources. I appreciate that CancerCare is there for them in so many ways, during such a difficult time for families and loved ones.”

CancerCare CEO Patricia J. Goldsmith announced a generous $100,000 gift made by Dorothy Schachne, CancerCare Board of Trustees member, in memory of her husband, David.

Goldsmith proceeded to honor Bristol-Myers Squibb with the 2016 Partnership Award for the company’s dedication to helping people living with the disease, and acknowledged the vital role the company played in transforming CancerCare from a community organization to an incredible national resource over the past 73 years. Teresa Bitetti, Senior Vice President, US Oncology, Bristol-Myers Squibb accepted the award on behalf of the organization.

At the encouragement of Event Chairs Annette and Andrew Pizzo, attendees also offered enthusiastic applause for the CancerCare social workers who serve people with cancer and their families each day, more than a dozen of whom were in attendance.

One of the most moving speakers of the evening was Michael Hahn, who lost his wife Karissa to cancer and was joined on stage by his 6-year old son Ryan.  Together, they shared how CancerCare’s Healing Hearts Family Bereavement Camp helped both of them, along with Ryan’s 9-year old brother Ethan, learn how to joyously celebrate Karissa’s life and connect with other families who were experiencing the same challenges.  Michael reinforced to attendees how important this was to his family, saying “You made a difference in our lives.”

Photos courtesy of Arielle Bob-Willis and Rose B. from LUXXELIVING

A few days later, I attended Dance Against Cancer which is a non-profit organization going strong on their sixth year. Dance Against Cancer producers Erin Fogarty and Daniel Ulbricht partnered with the American Cancer Society to present the  fundraising event held on Monday, April 25, 2016. The gala benefit brings together artists from leading dance companies from New York City and beyond for a night of performances and world premieres.

Founded in 2010 by Erin Fogarty, Director of Programming at Manhattan Youth Ballet, and Daniel Ulbricht, principal dancer at New York City Ballet, Dance Against Cancer has raised over $575,000 in support of the American Cancer Society's mission to create a world free of the pain and suffering of cancer.

The event had over 500 guests in attendance and raised more than $250,000 for the American Cancer Society, which will fund lifesaving cancer research and support patient and family service programs like Hope Lodge New York City. VIP guests enjoyed cocktails and passed hors d'oeuvres at 6 p.m., followed by world premiere dance performances at 7:15 p.m., with a post-performance reception and silent auction for all guests and performers.

All performers volunteer their time to train and participate in the event. There's no compensation paid to them and some of the dancers are regulars volunteering to participate in the event every year. Last year Stella Abrera along with husband and professional ballet dancer and actor Sascha Radetsky performed together. This year Abrera had a solo piece but Sasha supported his wife by attending the event and after-party reception.

​Last but not least, the American Cancer Society held an intimate VIP Exclusive Invitation Only reception on Thursday, April 28th at the exquisite Designer Romona Keveža’s Penthouse Flagship at One Rockefeller Plaza. Keveža presented her Spring 2016 collection which included red carpet classics favorited by celebrities such as Angelina Jolie, Ariana Grande and Kate Beckinsale. Romona Keveža will donate 10% of the event proceeds to the American Cancer Society.

The guests, while enjoying champagne and macaroons, were invited to mingle at designer Romona Keveža’s Atelier, while also given the chance to learn about the American Cancer Society (ACS) and their 11th Annual Taste of Hope event. Taste of Hope is a prominent culinary, wine, and spirits event which features some of New York’s most popular restaurants, chefs and beverage vendors. The event raises money towards ACS’s goal of eliminating cancer as a major health problem. This year’s event takes place on May 25th at Metropolitan Pavilion. The event will honor Chef David Burke, Chef Drew Nieporent and the 2016 Philanthropic Honoree Jean Shafiroff and will be hosted by Chris Wragge.  You can expect for Jean to wear a full length gown that evening. Ticket prices start at $200.

Mark D. Friedman, Co-Chair for American Cancer Society's Taste of Hope, spoke to the invited guests about Taste of Hope and presented 2016 Philanthropic Honoree Jean Shafiroff, who then went on to say a few words about her commitment to the cause and her recent visit to The American Cancer Society’s Hope Lodge in New York City, before thanking Romona Keveža for hosting the event in her Atelier. Shafiroff, who is also the author of Successful Philanthropy: How to Make a Life by What You Give, was wearing a 2016 Romona Keveža Collection dress featuring a fitted bodice with a floral flared skirt especially for the event.

Also addressing the guests was Elizabeth Mayer, Development Manager of Distinguished Events at American Cancer Society, who thanked Friedman, Shafiroff, Keveža and all the guests attending the event. The cocktail reception, which was attended by around 50 notable New Yorkers, came to a close at 8:00pm.

FCancer throws parties all over the world that give their community a unique bonding experience. Your ticket is the FCancer

t-shirt – pick your cancer ribbon and show the world why you’re in attendance. These events have not only raised considerable funds but have also provided an avenue for the community to fight back against cancer with levity and revelry. Social handles and hashtags for the event include the following: @fcancernow, @DJTayJames, @SE_HH, @TheWIGMusic, @mooseknuckles, @hpvanalcancer, #nimolero, #FCENYC, #fcancernow, #FCKnuckles, #FCancer

Additional events the American Cancer Society will have include ACS CAN New York Cancer Research Breakfast on Wednesday, June 1st at Hard Rock Cafe in Times Square. Tickets are only $25 and to purchase click here or call Michael Davoli at 212-237-3853. 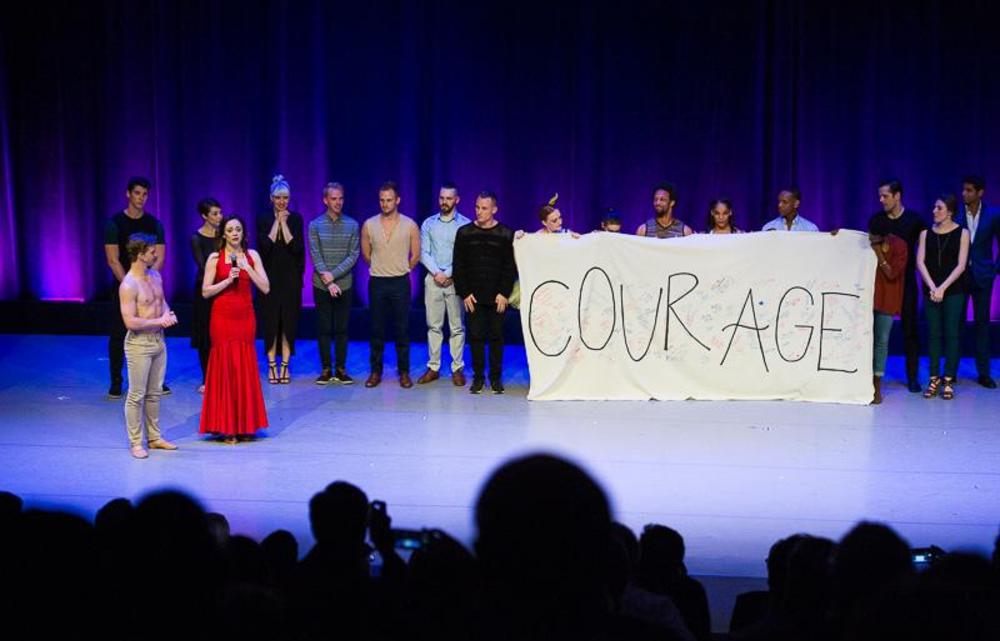