On the evening of Tuesday, June 14th I was picked up by a black sedan courtesy of Maison Mumm to attend the invitation only party to celebrate the new laser red G. H. Mumm Champagne Bottle. It was great that they kept the location secret were uninvited guests would not be able to attend as the space was perfect for the crowd whom attended. We thought it would be your typical party with a lot of Champagne flowing from the beginning of the evening while hors d'oeuvres were passed by model waiters and music played by a famous DJ. Well, in essence it was that but with a twist...

A good number of guests arrived on their black sedans and patiently waited to go inside the party. As the party began we were given a cocktail which resembled watermelon and grapefruit combined. We all thought it was a cocktail and then we learned there was a mishap and the Champagne which should've been served had a delay and therefore; we were just savoring on juice for about an hour or so.

Lauren Scala went up to the stage and told us of the mishap and guests were invited to the celebration party but unfortunately we were told that the new Mumm champagne bottle had yet to arrive on-site.  We were then introduced to the short-film with Mumm's Cellar Master Didier Mariotti and actor Kellan Lutz who was able to showcase and array of stunts on his way to New York City from France to deliver the bottle.

Embrace yourself and watch the short-film which every attendee had a chance to view at the party.

Kellan Lutz and Didier Mariotti raced against time to deliver the new bottle from France to the US via private jet, motorcycle, speed boat and sports car along with adrenaline filled scenes of skydiving and parkour.  In the final segment, as Kellan sped on a motorcycle with the new bottle to the Lightbox venue where the party was happening, the film ending coincided with Kellan’s real-life entrance into the celebration party via the motorcycle in what has become the most “Daring Delivery” of a champagne bottle to the US. It was certainly an experience I haven't seen at a party before and the crowd was pleasantly pleased with the delivery.

The bottles is designed by famed British designer Ross Lovegrove, the new bottle forgoes any labels and instead indents Mumm’s iconic red sash and emblem into the body of the bottle, resulting in an avant-garde and forward thinking silhouette that also completely changed the champagne aging process.  As one of the most pioneering champagne houses in France, Mumm presented the new bottle design to American audiences in one of the most non-traditional ways possible.

Guests continued to enjoy the evening surrounding themselves with Didier Mariotti, Kellan Lutz, Lauren Scala and Chanel Iman at the photo booth where they had an opportunity to follow on Kellan's steps and sharply open up a bottle of G.H. Mumm while capturing the moment in the photo booth area. The Champagne was flowing throughout the evening and model waiters where graciously walking towards the guests to serve them. The appetizers kept coming and the music by DJ Chelsea Leyland captured the mood of the evening. Last but not least, guests where given a nice gift bag which included a bottle of G.H. Mumm for them to take home. My bottle is nicely chilled and I still don't want to open it because the design of the bottle is simply exquisite just like it tastes. 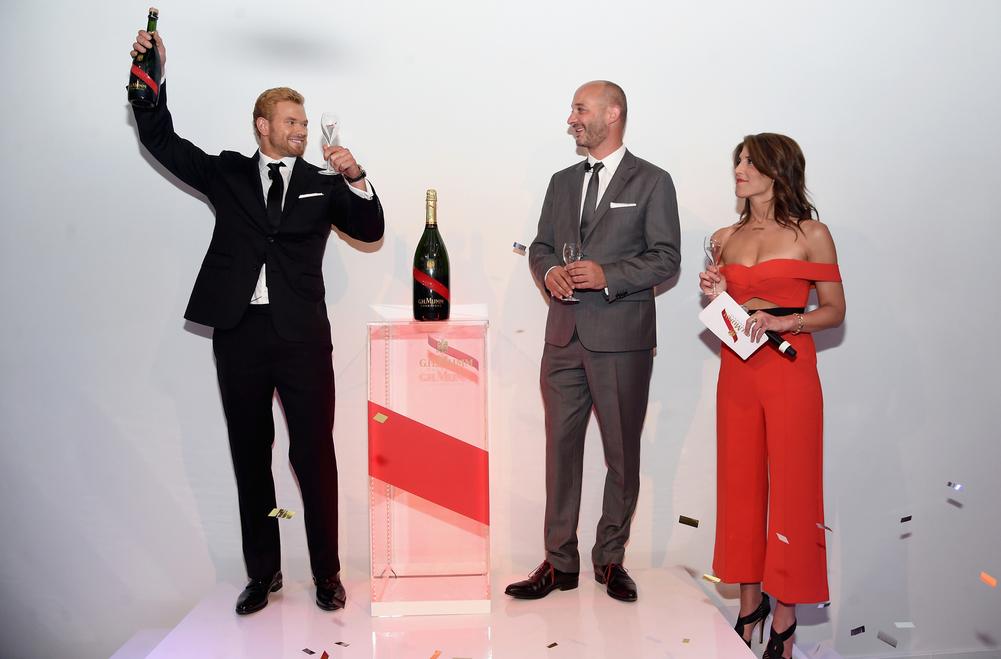