​Fleet Week hit NYC this Sunday and Sailor Jerry Spiced Rum celebrated with Sailors, Marines and the Coast Guard with a Block Party. There were tattoos, hair cuts, American BBQ, boozy ice cream and more on Sunday, May 29th at Pier 84.

Norman Reedus (The Walking Dead) was on hand to lead a toast to the servicemen and servicewomen, and then Cage The Elephant took the stage for a free concert.

Sailor Jerry Spiced Rum, created to honor the father of American old school tattooing, Norman "Sailor Jerry" Collins, and "Cage The Elephant" performed a free concert as part of its "Sailor Jerry Block Party" during Fleet Week. The event celebrated Sailors, Marines, and Coast Guardsmen, and their supporters, with the Grammy-nominated American rock band's performance, free tattoos, and old-fashioned American BBQ on Hudson River Park's Pier 84. The Sailor Jerry Spiced Rum Block Party held on Sunday, May 29th begun at 1pm and the concert begun at 4:30 pm. Actor and military supporter Norman Reedus (The Walking Dead), made a special appearance and lead a toast to the troops, before the concert.

Complimentary tickets for service members and civilians were available beginning May 25th. Visit www.sailorjerry.com to learn more about the Block Party and all the Sailor Jerry Spiced Rum Fleet Week activities.

Sailor Jerry Spiced Rum was created to honor Norman "Sailor Jerry" Collins, a Navy vet who built his rep inking soldiers and sailors in WWII-era Honolulu where he established his legendary tattoo parlor and himself as the undisputed father of American old-school tattooing. Following his naval service, Collins made WWII-era Honolulu his home and continued honing his skills as a tattoo artist. Sailors on Shore Leave in Honolulu would wait in line for hours outside Collins' Hotel Street tattoo shop to be inked by the master himself. Not one to rest idly, Collins also became a licensed skipper of a large three-masted schooner, played the saxophone in his own band, and frequently hosted a radio show. These personal passions are now celebrated through Sailor Jerry Spiced Rum and shared with like-minded individuals.

Sailor Jerry Spiced Rum participated in the official Fleet Week events and included the annual Parade of Ships marking the arrival of ships to New York Harbor, a Welcome BBQ in Brooklyn, and many more. Sailor Jerry Spiced Rum has also created a "Home Base" at 348 West 44th Street for the week, that will serve as a one-stop source of activity for Service Members in town during Fleet Week. "Home Base" was open daily from Wednesday, May 25th thru Saturday, May 29th from noon until 9PM. Special activities available to all included complimentary haircuts from Frank's Chop Shop (available Wednesday and Thursday from 1-4PM) and complimentary tattoos by Three Kings (available Friday from 5-8PM and Saturday from 1-4PM). Haircuts and tattoos were limited to a first come first serve basis; those wishing to participate were required to sign in. Sailor Jerry Spiced Rum invited service members and supporters to stop in and sign up.

Fleet Week New York, now in its 28th year, is the city's time-honored celebration of the sea services. It is an unparalleled opportunity for the citizens of New York and the surrounding tri-state area to meet Sailors, Marines and Coast Guardsmen, as well as witness firsthand the latest capabilities of today's maritime services. The weeklong celebration has been held nearly every year since 1984. More than 4,000 people attended to visit New York to enjoy Fleet Week this year.

Tickets were free and available starting May 25th at Sailor Jerry's Home Base and online. All info can be found at www.sailorjerry.com/fleetweek.

During Fleet Week at The Intrepid with

Norman Reedus and a performance by "Cage The Elephant"

Norman Reedus at the Sailor Jerry party event at the Intrepid during Fleet Week.

Photography by Steven Sherman from LUXXELIVING. 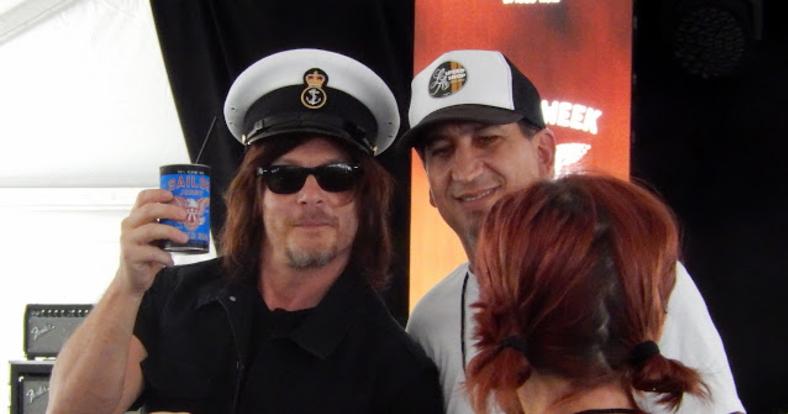