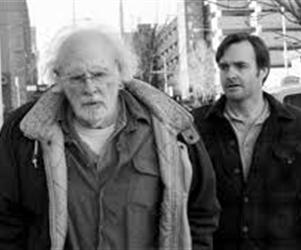 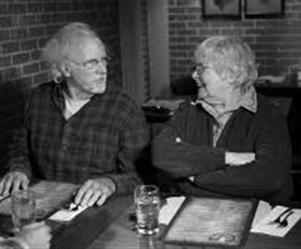 Aging character actor Bruce Dern (“Coming Home”) certainly has found the role of his lifetime in Woody Grant, a near senile old codger with a lifetime of alcohol and regret stewing inside of him. Dern grabs Woody by the horns, imbuing him with a grouchy bitterness beneath the physical decrepitude. Woody is lost inside his own head: perhaps it’s encroaching dementia or perhaps he’d just rather live there than listen to the harpings of his scold wife Kate (a marvelous June Squibb). It’s a character that could have been obnoxiously showy but Dern downplays Woody’s kookiness and reveals the sad, ugly truths of growing old. No surprise that he won Best Actor at the Cannes Film Festival last May.

Superficially “Nebraska” is another road trip movie from a director who likes nothing better than putting his actors in cars and seeing what happens. “Sideways” and “About Schmidt” are cases in point. But this film, from a script by Bob Nelson, is more specifically about a father who has been a distant, unknowable figure to his son David, played by SNL alumnus Will Forte. Forte, as the straight man counterpart to Dern’s Woody is almost disastrously bland. His David is a milquetoast salesman son living in the shadow of his local news anchor older brother Ross (Bob Odenkirk). At a crossroads in his own life, with a girlfriend who has just left him after he is unable to commit, David decides to drive his dad to Lincoln, Nebraska from his hometown of Billings, Montana. Woody is convinced he is a winner of a million dollar sweepstakes prize. And no amount of reasoning can convince him it’s a scam. Along the way, they find themselves stopping by Woody’s hometown, where an impromptu family gathering takes place. Dern peer Stacy Keach (“Fat City”) shows up as an old frenemy of Woody and it’s a delight to see these actors share the screen.

Here’s where Payne’s tender relationship drama verges into parody as Woody meets up with old family members who exist along the spectrum of stereotypical mid-western farmers and dummies who can only talk about cars while watching football on TV. Scenes in local eateries where people sing karaoke are certainly amusing, but there’s a mocking tone to Payne’s portrayal of these local folk that seems almost cruel.

The Oscar talk is all about Dern (although it’s a crowded field this year with Redford, Ejiofor, Hanks, Whitaker et al.). But I hope the Academy doesn’t overlook Squibb as Woody’s mean-spirited wife. Squibb was briefly in “About Schmidt” (she plays Nicholson’s wife who dies at the outset) but here she gets to shine. Delivering scathing commentary on friends and relatives, Kate gets a laugh with everyone of her lines. Her grating personality has no doubt contributed to her husband’s taciturn grouchiness.

Payne’s decision to release “Nebraska” in black and white is an interesting one. It casts a nostalgic pall over the story, but does nothing to lessen the impact of the dreariness of the locations, which are bleak and barren. The cinematography by Phedon Papamichael is not the sumptuous, rich black and white of a “Manhattan”, but rather the gray smudginess of a cloudy day with a hangover. It’s a fitting match of character and mise en scene but it’s also alienating. There’s an almost stylized stiltedness to some of the dialogue and together with the cool visual palette, it’s hard to become emotionally attached to the characters.

Moments of genuine tenderness exist between Woody and David and the script touches on many truths about fathers and sons. Can we ever know our parents? How important is it to understand the roots of family? Sublime moments and comic touches pepper this slow-moving film which is frustratingly distant as it seeks to engage.