Thousands of people filled the surrounding streets to watch as 45,000 multi-colored, energy efficient LED lights burst into color on the approximately 12-ton, 76-foot tall, 47-foot wide, 75-year-old Norway Spruce that is topped with a spectacular Swarovski crystal star. Through the holidays, an estimated 750,000 people will see the tree daily.

Introduced in 2007, the tree’s LED lights, on five miles of wire, draw a fraction of the power that had been traditionally required by the tree, reducing energy consumption from 3,510 kwH to 1,297 kwH per day, saving as much energy as a single family would use in a month in a 2,000 square foot home. Hundreds of solar panels atop one of the Rockefeller Center buildings help power the LEDs.

The Swarovski star, which is celebrating its 10th anniversary atop the Rockefeller Center Christmas Tree this year, is comprised of 25,000 crystals, measures 9 ½ feet in diameter, and weighs 550 pounds. The star’s 12 rays are outfitted with 720 LED bulbs to create a dazzling, twinkling effect through customized light sequencing programmed by a complex computer system.

This year’s tree comes from the yard of the Vargoshe family of Shelton, CT. It was cut down on November 7th and transported by flatbed truck to New York City, where it arrived on November 8th, and was raised into place in front of a crowd of spectators. John and Louise Vargoshe, along with their sons Nathan and Noah, attended the tree lighting with family and friends. The tree has been used by the Vargoshe family since they moved to Shelton 22 years ago. John and Louise first attached baby swings to the bottom branches and later tethered baseballs to the tree for their sons to use for batting practice. As local lore goes, the beautiful Norway Spruce originally was used by the home’s occupants as a Christmas tree and then was planted in the yard after the holiday, likely in the 1950s. “I always said if we hit the Lotto I would hire someone to decorate the tree,” said John. “In a way, it is like we won the lottery.”

Spectators can view the lit tree each day from 5:30 A.M. - 11:30 P.M.; all day (24 hours) on Christmas; and from 5:30 A.M. – 9:00 P.M. on New Year’s Eve. The last day to view the tree is January 7, 2014. Rockefeller Center officially began the Tree Lighting Ceremony in 1933, when a Christmas tree was erected in front of the then-RCA Building and covered with 700 lights. Christmas trees in Rockefeller Center have ranged from 50-foot Pines to 100-foot Norway Spruces and are viewed by millions of spectators during the holiday season. 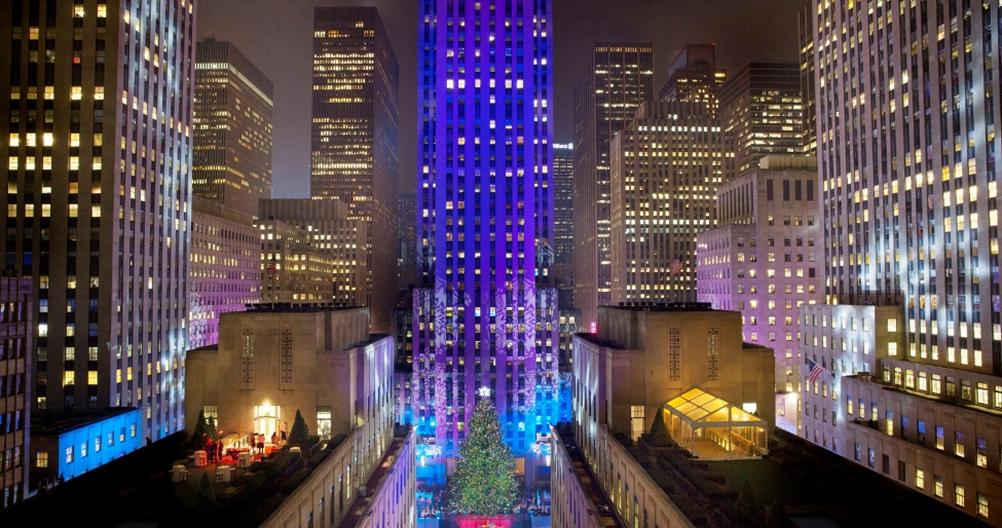