A Love Affair with Cuba

On Thursday, October 13th, 2016 in honor of Hispanic Heritage Month, we were invited to attend a special event with Cubavera and Art Bodega Magazine at El Barrio's Artspace PS 109 in East Harlem, New York.  Cubavera is the influential Latin apparel brand that takes inspiration from its rich Hispanic heritage and was the main sponsor for a fashion exhibition in partnership with Art Bodega Magazine showcasing the cultural inspiration  behind the legacy of its namesake from 6:30pm - 10:30pm. The exhibit remained open to the public from October 13 thru the 17th, 2016.

The evening included a fusion of fashion and music, including Cuba­themed discovery stations and a runway show highlighting the cultural elements that drive Cubavera’s style aesthetic. As the runway show took place we were transported to a much warmer locale such as Cuba by listening to the music of the Queen of Salsa, Celia Cruz among other very latin hot music which was perfectly paired with Cubavera outfits the models were wearing. Celebrity influencer, singer and acclaimed Telenovela star Gabriel

Coronel was the host of the event.

We had the pleasure to speak with the host of the evening Gabriel Coronel one-on-one and this is what he shared with us:

LUXXELIVING: It's such a pleasure to have you here in New York. You currently reside in Miami, tells us what is your collaboration with Cubavera?

GC: I feel very honored to have been invited to be the host for the event tonight. It's always a pleasure to work with a team that is very professional and truly values the latin culture such as Cubavera. Currently, I'm wearing a Cubavera linen suit for the occasion.

LUXXELIVING: What is next for Gabriel Coronel? Are you in production with a telenovela, movie or singing?

GC: I'm going to dedicate my time to get back to my music because I've been away from it for 3 years already. I am very fortunate though because I was given a great opportunity to work with a diverse group of talented people working on various projects in television.

LUXXELIVING: For the fans who still want to see you on TV, where can they find you?

GC: The latest I've worked on is "El Señor de los Cielos" which is an American telenovela series co-produced by Argos Comunicación and Telemundo. ​

As we finished the interview, he was a true gentleman thanking us and giving enthusiastically love and kisses to all his fans. We can see why he has a strong following. To follow Gabriel Coronel in social media, click here: Facebook, Instagram, Twitter

The night continued on and also featured authentic Cuban hors d'oeuvres and a state­-of-­the-­art audiovisual tribute to the golden age of Cuba in the 1950’s, embracing a foundation of the Cubavera clothing line’s proud heritage. After the runway show we were all given a Cubavera goody bag containing authentic Café Bustelo® Colombian coffee and an authentic mini Cubavera branded Cuban coffee maker.

Undoubtedly, Cubavera’s Hispanic Heritage finale event will take you on a journey through the entire "Cuba Experience". Cubavera invites us to “Live the Good Life” with a night guaranteed to stimulate your fashion and taste the senses. Joining Cubavera and Art Bodega as event sponsors are the Miami International University of Art and Design and El Barrio’s 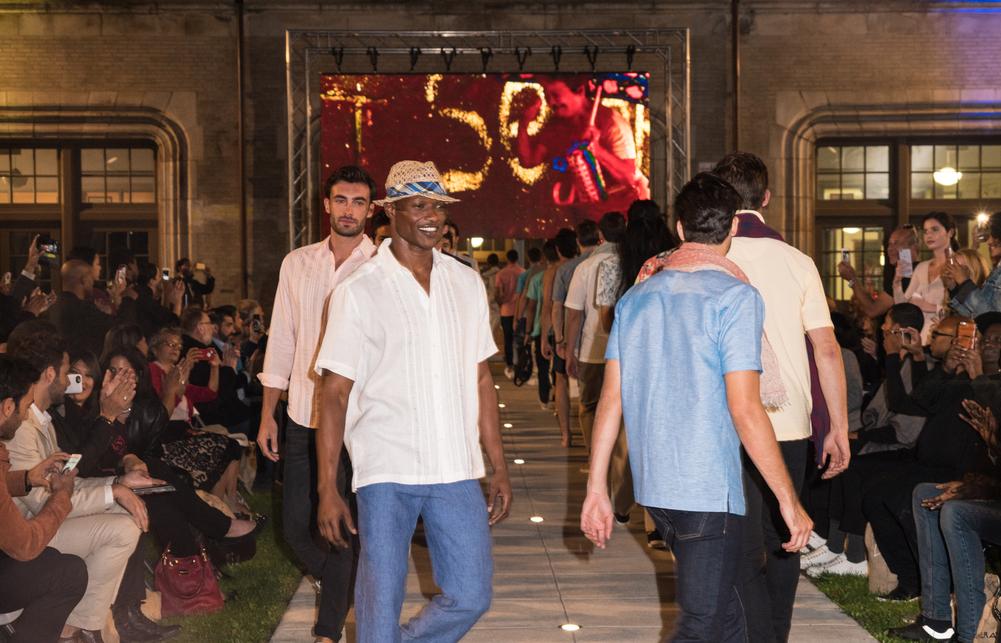