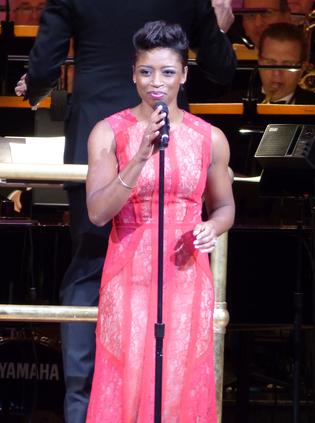 Just a glimpse of the final performance of the night with these incredible Sophisticated Ladies singing "In The Night". 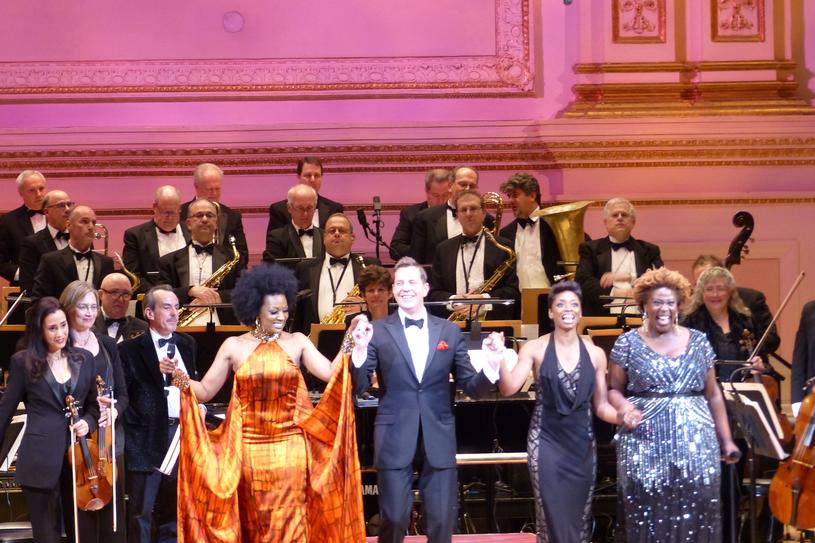 Tony Award nominee and award-winning actress Montego Glover is currently starring as Fantine in Les Misérables at the Imperial Theatre on Broadway. Previous to Les Misérables, she co-starred in the Broadway original musical It Shoulda Been You. Ms. Glover originated the starring role of Felicia Farrell on Broadway in Memphis (Tony Award, Best Musical 2010) for which she received a Tony Award nomination for Lead Actress in a Musical, a Drama League nomination, and won both the Outer Critics Circle Award and Drama Desk Award for her performance. Ms. Glover made her Broadway debut in The Color Purple and has been a guest artist at the Old Globe Theatre, La Jolla Playhouse, Seattle’s 5th Avenue Theatre, Huntington Theatre Company, and the Geffen Playhouse among others. Concert work includes The New York Pops, Jazz at Lincoln Center, Lincoln Center Theater, Philadelphia Orchestra, Atlanta Symphony Orchestra, Indianapolis Symphony Orchestra, Caramoor Music Festival, the Delacorte Theater, and the Smith Center (PBS Special). Television and film roles include FOX’s The Following, ABC’s Black Box, Hostages, Smash, Golden Boy, The Good Wife, White Collar, NYC 22, Law & Order, Made In Jersey and the upcoming feature Alone. Montego has served as a member of the Artists’ Committee for the Kennedy Center Honors and is a New York PopsEd Ambassador. BFA from Florida State University. @montegoglover  www.MontegoGlover.com

Capathia Jenkins’ Broadway credits include Newsies; Martin Short: Fame Becomes Me; Caroline, or Change; The Look of Love; and The Civil War. Additional stage credits include Nora Ephron’s Love, Loss, and What I Wore; (mis)Understanding Mammy: The Hattie McDaniel Story (Drama Desk nomination); Caroline, or Change; Godspell; and The Colored Museum (Huntington Theatre Company). Ms. Jenkins has been featured on original cast recordings for Martin Short: Fame Becomes Me; Caroline, or Change; Godspell; and Children of Eden. Ms. Jenkins’ television and film credits include 30 Rock, The Practice, Law & Order, The Sopranos, Third Watch, Law & Order: SVU, Top Five, and Musical Chairs. She has appeared as a soloist with many symphony orchestras in the U.S. and abroad including Cleveland Orchestra, Cincinnati Pops, Philly Pops, National Symphony Orchestra, Hong Kong Philharmonic and Calgary Philharmonic Orchestra. She is also featured on the soundtracks for Smash (seasons 1 and 2), Nine, Chicago, Mission to Mars, and Legally Blonde 2.

You can also catch Capathia perform during the live performance of THE WIZ on NBC Thursday, December 3rd, 2015 at 8PM.  www.capathiajenkins.com

Sy Smith was born in New York City and raised in Washington, DC. After graduating from Howard University, she moved to Los Angeles where she got the attention of her musical contemporaries and heroes, earning her coveted tours as a backing vocalist for the likes of Whitney Houston, Chaka Khan, Meshell Ndegeocello and many more. Ms. Smith continued to work with musical director Rickey Minor as a supporting vocalist on American Idol and later joinned his band at The Tonight Show with Jay Leno. As an indie-soul recording artist, Ms. Smith has released 4 albums to critical acclaim, pioneering the nu-soul scene in LA and taking her sound all over the world. As an actress, she’s starred in numerous TV, film, and stage productions, including a recurring role on FOX’s Ally McBeal, How I Met Your Mother, and American Dad. She also received two nominations for Best Supporting Actress in a Musical/Comedy from the NAACP Theatre Awards for her roles in If You Don’t Believe and Body Language. As a songwriter, Ms. Smith garnered an Emmy nod for Best Original Music/Lyrics for her original song “Welcome Back (All My Soulmates)” for the HBO film Dancing In September. Ms. Smith was a featured guest on the Grammy-nominated DVD Chris Botti in Boston and currently tours with the jazz trumpeter, dazzling audiences with her multi-octave range, unique style of improvisation and soulful interpretations of jazz standards.

ABOUT: THE NEW YORK POPS

The New York Pops is the largest independent pops orchestra in the United States, and the only professional symphonic orchestra in New York City specializing in popular music. Under the leadership of dynamic Music Director and Conductor Steven Reineke, The New York Pops continues to re-imagine orchestral pops music. The orchestra performs an annual subscription series and birthday gala at Carnegie Hall and a summer series at Forest Hills Stadium in Queens, NY. The New York Pops is dedicated to lifelong learning, and collaborates with public schools, community organizations, children’s hospitals and senior centers throughout the five boroughs of New York City. PopsEd allows thousands of New Yorkers of all ages and backgrounds to participate in fully customizable music programs that blend traditional education with pure fun.  Visit www.newyorkpops.org for more information. Follow The New York Pops on Facebook (facebook.com/newyorkpops), Instagram (@thenewyorkpops), and Twitter (@newyorkpops).

Steven Reineke is the Music Director of The New York Pops at Carnegie Hall, Principal Pops Conductor of the National Symphony Orchestra at the John F. Kennedy Center for the Performing Arts, Principal Pops Conductor of the Toronto Symphony Orchestra, and the Principal Pops Conductor Designate for the Houston Symphony, beginning in the 2017-2018 season. Mr. Reineke is a frequent guest conductor with The Philadelphia Orchestra and has been on the podium with the Boston Pops, The Cleveland Orchestra and the Chicago Symphony Orchestra at Ravinia. His extensive North American conducting appearances include San Francisco, Houston, Seattle, Edmonton and Pittsburgh. As the creator of more than one hundred orchestral arrangements for the Cincinnati Pops Orchestra, Mr. Reineke’s work has been performed worldwide, and can be heard on numerous Cincinnati Pops Orchestra recordings on the Telarc label. His symphonic worksCelebration Fanfare, Legend of Sleepy Hollow and Casey at the Bat are performed frequently in North America. His numerous wind ensemble compositions are published by the C.L. Barnhouse Company and are performed by concert bands around the world. A native of Ohio, Mr. Reineke is a graduate of Miami University of Ohio, where he earned bachelor of music degrees with honors in both trumpet performance and music composition.  He currently resides in New York City with his husband, Eric Gabbard.

The ladies consistently performed their own rendition of songs from great artists including "The Lady is a Tramp", "Love is Here to Stay", "They Can't Take That Away From Me",  "Come Rain or Come Shine",  "Fascinatin' Rhythm" , "Somethings Gotta Give", "The Best is Yet to Come", "One For My Baby", "God Bless the Child", "Summertime". The evening ended with a performance by the trio singing "Blues in the Night". At the end, the ladies surprised us by coming out to perform one last song, "Get Happy". The crowd was happy to see the trio sing one last ballad as the last performance of the night and received a standing ovation.  The evening ended with an intimate reception after the concert at RedEye Grill Restaurant. Guests enjoyed Champagne and intimate conversations with each other and guests. 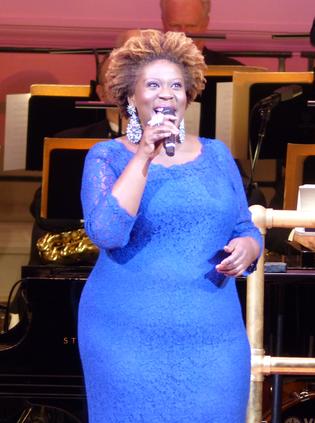 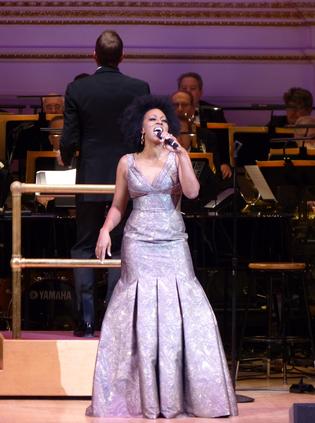 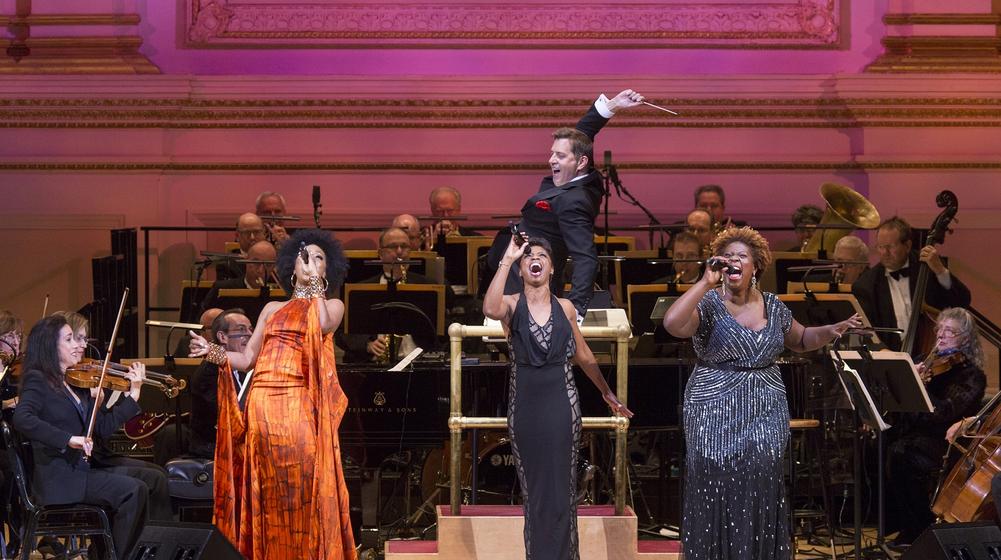 The weather was just perfect on Friday, November 13th and the beautiful evening continued with an incredible performance by The New York Pops led by Musical Director and Conductor Steven Reineke continuing its 33rd season at Carnegie Hall’s Stern Auditorium/Perelman Stage with Sophisticated Ladies. The concert commemorated the centennial year of the birth of Billie Holiday and also celebrated other groundbreaking icons of American popular music. The one night only concert included performances by guests artists Capathia Jenkins, Montego Glover and Sy Smith bringing back music from the era of Ella Fitzgerald, Frank Sinatra, Sarah Vaughan to Dinah Washington.

The concert brought viewers back to the 1920's, 1930's eras and featured some tunes from singers such as Frank Sinatra. The music was a beautiful seductive and sensual experience, so decadent each song was a sweet little bite. The full house indicated how many people were interested to be transported back to the era where music was simply unique and exquisite and lives on to this day.

​“Sophisticated Ladies is going to be an absolute knockout of a concert,” said Music Director Steven Reineke. “We’ve never done anything quite like it, and I know that Montego, Capathia, and Sy, alongside our fantastic 78-piece orchestra, will bring the house down again and again. This one is definitely a concert not to miss.”

​The evening began with a performance by The New York Pops with "Take The A Train", followed by performances of "Strike Up the Band" and "Clap Yo' Hands" by Capathia Jenkins. Sy Smith strutted in and performed a wonderful version of "Zaz Zhu Zaz" and "Stormy Weather". Last but not least, the very talented Montego Glover showcased her talent by performing " I Can't Give You Anything But Love, Baby".​​ All their voices were flawless and each performer brought their own individuality and flair to each song. These Sophisticated Ladies truly complemented each other.