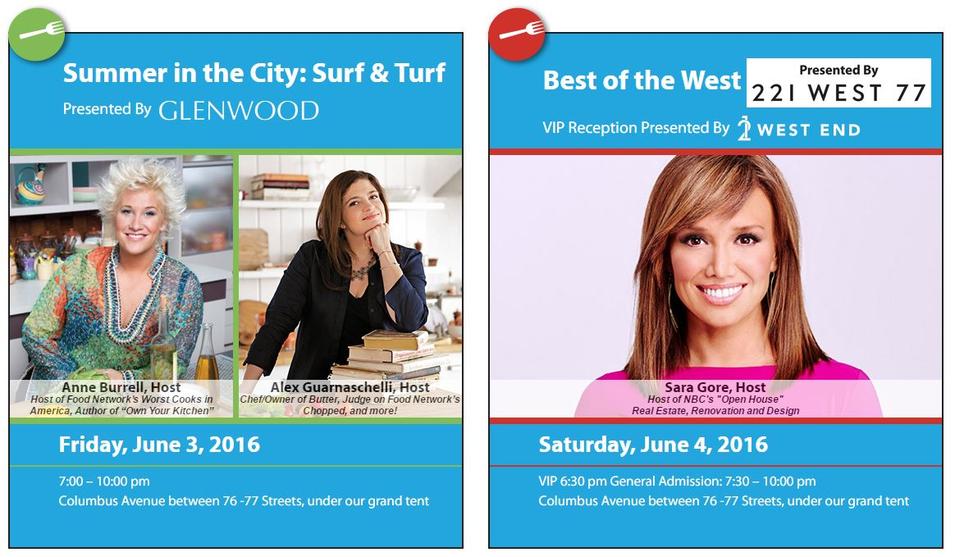 The 2016 New Taste of the Upper West Side returns this June with an impressive lineup of new and returning restaurants, notable chefs, and celebrity hosts for a delectable two-night celebration. The annual event, which was created by the Columbus Avenue Business Improvement District (“BID”), a 501(c)(3) not-for-profit, donates all net proceeds to the local community for neighborhood improvement and beautification projects such as the Columbus Avenue BID’s Sustainable Streetscape project, Theodore Roosevelt Park, Wellness in the Schools nutritional program, Greenhouse Classroom, Citymeals-on-Wheels and other beneficiaries.

“After nine years, New Taste of the Upper West Side has become an iconic event for Upper West Siders, as well as a destination food festival for people all over the city and from afar. We take pride in that the event continues to showcase our best local restaurants, as well as, of course, our fantastic Upper West Side neighborhood,” says Barbara Adler, Executive Director of the Columbus Avenue BID. “Each year, we strive to add something fresh and unexpected to this beloved festival. For 2016, it’s the debut of “Summer in the City: Surf & Turf,” a totally fun event with a beachy theme, summer spirit, and grilling! Adding even more excitement will be ten new restaurants making their first appearances at this year’s events, even some that will not yet have opened.”

Friday, June 3rd at 7:00 PM to 10:00 PM
Summer in the City: Surf & Turf
Presented by Glenwood
Under a grand tent on Columbus Ave between West 76th and 77th Streets in the O’Shea Complex Schoolyard

Dive into summer with everyone’s favorite surf, turf and seasonal favorites! 45 restaurants are reimagining beloved warm-weather standards with unique and innovative twists. Senses are bound to be heightened in a beachy-chic setting under an exquisite block-long tent where the best flavors, scents and sounds of summer come alive to the rhythms of the Silver Arrow Band. Be the first to discover yet-to-be named restaurant debut from two-time Michelin-star chef April Bloomfield with partner Ken Friedman (Spotted Pig, The Breslin); and Maison Pickle, the newest restaurant from the Jacob’s Pickles team. Other “firsts,” including neighborhood newcomers Jin Ramen, Han Dynasty and Playa Betty’s, will be joining dozens of returning event faves, such as Momofuku Milk Bar, The Meatball Shop, Jacob’s Pickles, Shake Shack and AG Kitchen. Hosting this star-studded evening are Anne Burrell, host of Food Network’s Worst Cooks in America and author of “Own Your Kitchen,” and Alex Guarnaschelli, chef/owner of Butter, judge on Food Network’s Chopped, mentor on Food Network’s All-Star Academy & author of “Old-School Comfort Food.” It’s a super soirée with international wine selections, craft beers, creative cocktails & so much more!
Cost: $105 per person or 2 for $185

Saturday, June 4th at 7:30 PM – 10:00 PM
BEST OF THE WEST
Under a grand tent on Columbus Ave between West 76th and 77th Streets in the O’Shea Complex Schoolyard

The spectacular culinary weekend comes full circle with Best of the West 2016, celebrating the crème de la crème of Upper West Side cuisine for a ninth year! It’s an exciting evening of grand gastronomy against a backdrop of beauty, high spirits and the sophisticated sounds of Joe Battaglia and his 18-piece New York Big Band, as hosted by the charming Sara Gore of NBC’s New York Live and Open House. More than 45 fabulous Upper West Side restaurants are preparing unique and delectable dishes. Exciting neighborhood newcomers Crave Fishbar, Olma Caviar Boutique & Lounge, Orwasher’s Bakery and Amorino Gelato will be joining dozens of revered restaurants returning for yet another great year, including RedFarm, Boulud Sud, Dovetail, Jacques Torres and Rosa Mexicano. A magical feast prepared by Masters!
Cost: $135 per person or 2 for $250

Saturday, June 4th at 6:30 PM – 10:00 PM
Best of the West VIP Presented by 21 West End
Under a grand tent on Columbus Ave between West 76th and 77th Streets in the O’Shea Complex Schoolyard

For a second year in a row, New Taste of the Upper West Side is enhancing an exceptional experience with its exclusive VIP Reception, presented by 21 West End featuring a private lounge and bar, and Caviar Lounge by Olma Caviar. VIP guests will receive special gift bags with items from our sponsors. Most importantly, true devotees of the culinary arts will have early access to 45 of the finest chefs on the Upper West Side for an entire hour before general admission!
Cost: $225 per person

For more information and to purchase tickets, please visit here.

​​​​The 9th Annual New Taste of the Upper West Side
Features Over 90 Restaurants and Star-Studded Celebrity Talent
Brand New “Summer in the City: Surf & Turf” Event